Iraq: Where Gays are Hunted Down, Tortured & Slaughtered. 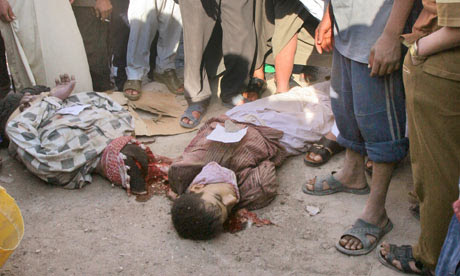 They hunt down gay people and then ritually slaughter them.

The killings are brutal, with victims ritually tortured. Azhar al-Saeed's son was one. "He didn't follow what Islamic doctrine tells but he was a good son," she said. "Three days after his kidnapping, I found a note on my door with blood spread over it and a message saying it was my son's purified blood and telling me where to find his body."

She went with police to find her son's remains. "We found his body with signs of torture, his anus filled with glue and without his genitals," she said. "I will carry this image with me until my dying day."

This is what we spent hundreds of billions of American dollars and thousands of American lives for.
at September 14, 2009