The Presence & Politics of Zero Mostel. 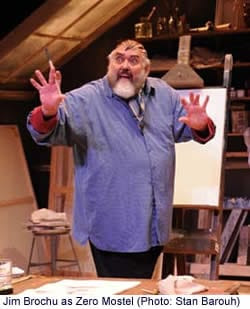 In a new, very thoughtful review of "Zero Hour" in DC Theatre Scene, Josh Fixler, raises two aspects regarding Zero Mostel. (I warn the reader, it's quite complimentary of our Mr. Brochu.) My emphases:

The play treats us to an opportunity that may never have existed in life: to be present for an evening in Mostel’s private sanctuary, his art studio... In this way, the play doesn’t feel much like an interview, but more like watching the inner workings of Mostel’s mind. He interrupts himself, sometimes with a witty line, and sometimes because he appears to have forgotten what he is saying.. Brochu’s performance is a symphony of the wiggling eyes and silly facial expressions which made Mostel famous. From the moment the play begins, we are pulled in to a world of the gregarious, the witty, and the raunchy. His Mostel is both self-deprecating and everyone-else-deprecating. There is more than one joke made at a friend’s expense, but you can tell that it is done with the deepest of love (the same may not be said for the comments about the interviewer’s stature and clothing choices). And, the best part is, all of this is hysterically funny.

If it wasn't funny, it wouldn't be Mostel!

The other night, after the show, a man said to me, "The moment he turned around, I believed he was Zero and I just relaxed. I knew I was in good hands."

Peter Marks called it "verisimilitude," a word Jimmy can't quite pronounce, but it means feeling as if you're in the presence of the real thing. Or, as he put it, "the next best thing."

Jimmy has always said, of course, that nobody can really be Zero Mostel. He was one of a kind. Rather, he says, "Zero inhabits me."

It's sounds supernatural, but really, it's just acting. This is what the great actors do. They don't inhabit a character. They let the character inhabit them. And when they're in the zone, it appears effortless. But effortless is not the same thing as "easy." One younger audience member came up to Jim afterward and thanked him for the acting master class.

Frankly, I think the world could use a great, big dose of Zero Mostel. To feel the energy of that volcanic presence -- "self-deprecating and everyone-else-deprecating" -- must have been as hysterical as it was intimidating and scary.

But, I wanted to begin this blog with the above so that a reader not acquainted with the play, would know that the piece itself is not a polemic, but a great entertainment. But Zero is not afraid to express his political opinions.

Mostel was quite a troubled man, and his boisterous persona often gives way to brokenness and anger. The portrayal is manic, an art of extremes, and the versatile Brochu goes from shouting to whispers and back again, sometimes in a single sentence. He captures the devastating effect that being black listed had on the actor.

Rent two movies: The original "The Producers" with Zero and Gene Wilder, a movie that almost didn't get released. Watch the first hallway/office scene with Zero and Gene Wilder. Watch the sheer terror on Gene's face as he cowers away from the wild animal Mostel. Just the credit sequence of the film, alone, puts me on the floor; Zero playing S&M games with Estelle Winwood, who, at that time, had to be a 150 years old.

Film two: "The Front." Watch him in the scene where the club owner only gives him half of what he'd been promised. Watch his body language as he shrinks into a helpless mess, big hang-dog eyes tearing your heart out. And watch him instantaneously morph into a bellowing, roaring dragon. And remember that he is thinking about his best friend, Phil Loeb, who had just committed suicide.

Jackie Gleason could pull that off, too. Each, a menacing mountain of pain, innocence and anger.

Others may have cowered in fear in front of the notorious House Un-American Activities Committee. But we watch as an offstage voice delivers the questions, and Mostel, alone in the spotlight, stares down his accusers and uses his signature brand of humor, to soften, but not hide, his indignation at being summoned. Brochu shows us the depth of agony that the Hollywood blacklist caused for Mostel and his friends and the profound sense of anger that he felt towards those who named names. In particular, Mostel rants more than once about Jerry Robbins, but even here we are shown the complexity of Mostel, who tells Robbins, to his face, that he is a traitor who will be condemned by their Jewish faith, and yet later describes the art of the Broadway choreographer as “brilliant”. Brochu does not sugarcoat or simplify but shows a man who is simultaneously strong and broken, a contradiction that I think summed up Mostel’s life.

Mostel’s defense of socialism is notably apropos as we hear that word brandished and misused so often in our modern media. This relevance is especially surprising considering that the play was written in 2006, before the “socialism equals evil” equation made its sudden return into our national consciousness and political discourse. I was also particularly moved by the wistful way in which Mostel reflects on America’s greatest socialist venture, Roosevelt’s Work Projects Administration and all of the great arts it funded. As an admirer of the greats, Mostel describes with reverence the impact that public funding for creative ventures had on the artistic legacy of the country, and notes how hard that must have been to pull off in such dire times. Zero Hour reaches from the past to give us commentary on the hard times and tough choices that we face today.

Interesting. What a great city for "Zero Hour" to be in right now. This is where people discuss these issues. And he's right. Jimmy put this into the play right from the beginning, long before it became a meme, and it's word for word, Zero Mostel.
at September 08, 2009