Questions from the past play into our present -- and future -- in Theater J's Zero Hour.

On Oct. 14, 1955, the actor and comedian Zero Mostel was called before the House Un-American Activities Committee (HUAC). He was asked if he was or had ever been a member of the Communist Party. He was asked, in a phrase that is as unsettling today as it was then, to ''name names.'' 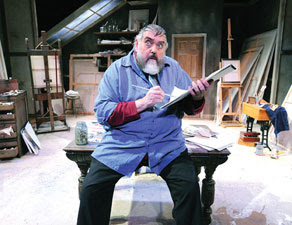 Established in the late 1930s, HUAC's mission was to investigate individuals and organizations with alleged ties to the Communist Party. The committee paid particular attention to entertainers, those individuals whose voices were heard loudly and widely. HUAC's work would later be rightly seen as a modern-day witch hunt, destroying lives and careers in the name of some unfounded greater good.

Jim Brochu's one-man show Zero Hour, the season opener at Theater J, takes that single transformative day in Mostel's life and uses it to tease open a biography that is as fascinating as it is startlingly rich.

Heartfelt and humorous, Zero Hour exercises a pleasing restraint in its storytelling by using the simplest of frames. Mostel is in his painting studio, giving an interview to a New York Times reporter. The set-up allows Brochu to take full advantage of both Mostel's complex personal history and wildly entertaining, quirky public persona. He jokes, reminisces and reveals in a fashion that is natural and uncontrived.

Brochu is an exceptionally talented writer and this play thrives because of his equal skills as an actor. He also manages the difficult act of investing in the life of an iconic figure without needlessly romanticizing him. (Though Brochu does step into the trap of indulging rather than editing in terms of the play's length.)

Even as we revisit that day in front of the committee, we see a man who was not trying to be a hero or make some grand political statement. Mostel was a citizen frustrated by the ridiculousness of HUAC and angered by its indignity and waste. Brochu gives us the truth of the moment and the man, and allows those echoes to resonate satisfyingly in our own time.