I have to plug my friend, Ryan's, fundraiser here, Mr. Broadway 2010.
Over the years, because I was so early on the Net, I met a number of young people, cyberly, who were, metaphorically and sometimes literally, sitting there with a gun to their head because of the intense emotion of growing up same sex attracted in a conservative religious home.
They feel their only recourse is to either kill themselves or run away. And the streets are not a good place for naive teenagers, especially those perceived to be weak.
The Ali Forney Center shelters homeless GLBT young people.
Anyway, it's a beauty contest for Broadway hunks, and Broadway star Tovah Feldshuh, to boot. What could be bad? From his blog: 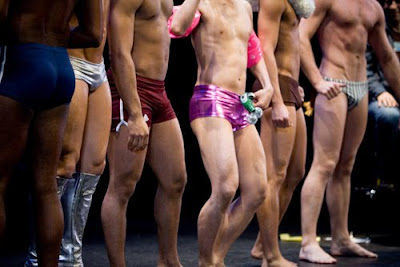 It's hard to believe that it's almost time for 2010's Broadway Beauty Pageant, pitting Broadway's hottest guys against each other to benefit The Ali Forney Center. It's an old fashioned beauty pageant with an American Idol twist.

We've just announced that the always marvelous Tovah Feldshuh will return to host for the third time. Announcements on contestants and judges are coming up, it's gonna be a great group!

Get your tickets now, starting at just $25.

This is the forth year that I've co-produced the show with my friends Jeffery Self & Wil Fisher. But, every year the pageant grows and more and more people join to help us make the night a huge success. I'm thankful to all of them!