On Tuesday, we did the Easter bonnet competition again. This time for the judges. I took a quick snap of the final pose, with all the show's bonnets in place.
If you look closely, you'll see Jim. We were the only group that built the bonnet, in front of the audience, during the number. In fact, I think someone said we were the first to ever do that. So, yay us! He's fourth from the right. 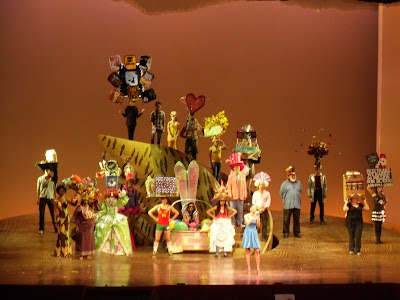 But look under the big, pink top hat and you'll see Jeramy, who substituted, at the last moment, for Leslie Jordan. His show and ours were the only two Off-Broadway shows to make presentations.
Jim was even better on the second day. The audience went crazy for him and laughed at Amy's lyrics and jokes.
Here's the Playbill report written by Blake Ross.
at April 28, 2010