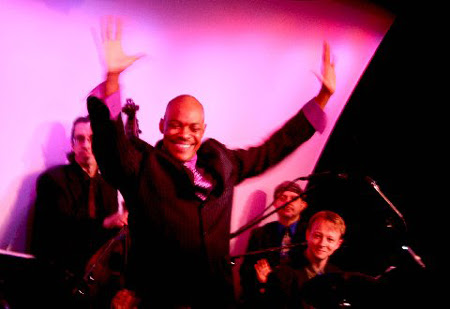 Last night, Jim and I were watching something on the tube. I forget what because I was only half-watching. My laptop was open and I was working on some music to get ready for my upcoming trip to New York. (I'll be there from June 9 through 19).

He suddenly said, "I think Devin must be on stage by now."

This is the big concert at the Metropolitan Room that we had all been waiting for. Devin Richards, a singer and a friend we had made back earlier this millennium when The Big Voice was playing in New York, was not only making his big club show debut, but he was singing three of my songs -- including a song with lyrics by Amy Lynn Shapiro called "Lovers In Disguise." Amy had been a nervous wreck all day thinking about it. A big Broadway singer debuting one of her songs!

And to add to all the excitement, Audra McDonald would be in the audience!

A few minutes later, my cell phone buzzed. It was a message. I called through to the message and it was just noise. Then I realized it was Devin singing. Amy was holding up the phone to the show so I could hear Devin singing. Actually, what I heard was shouting and applause.

Then it buzzed again. This time I caught it live. "Lovers In Disguise." And there was laughter. The crowd was going crazy! The song ended and more screaming and shouting and applause!

About a half hour later, it was Amy. She was so thrilled. (Amy tends to be just be excitable). Not only had Devin said our names out loud when he sang our song, but after the show, Audra came up to her, told her how much she enjoyed the music and asked her for a CD of more songs. (And for those of you reading this who have no idea who Audra McDonald is, she's a 4-time Tony Award winner who's nominated yet again for a 5th Tony for "110 In The Shade" which is running right now on Broadway with Devin Richards in the cast). 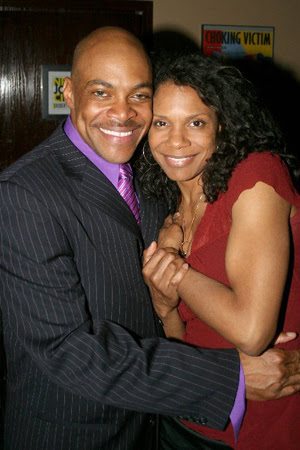 Devin is one of the main reasons I'm going to be in New York. I scheduled this trip over a month ago, the point of which is to get there and work with him and some other singers on songs, both new and old, and to work with Mark Janas on the score for The Big Voice for its final presentation to Samuel French (which will be publishing and licensing our musical very shortly).

We were so excited for Devin. He's been sweating over this show for weeks. And I felt so honored that he not only sang my songs -- "I Want To Make Music" and "Beyond The Light" along with "Lovers In Disguise" (which is a very dramatic song he turned into a hilarious comic spoof) -- but he listed my name in all his press materials.

Well, according to all the reports I got, he was a smashing success. So much so that they've asked him back. And he's picking up more gigs besides. And for Amy and me, it was thrilling to have our songs sung by a genuine New York Broadway singer whose voice is truly amazing.

Hooray for all of us!

you are too kind to put me in your blog like that. it was an honor to sing your songs!!
much love,
devin

Congratulations to all of you! Couldn't happen to a more talented bunch.