Stepping in for Hal Linden. 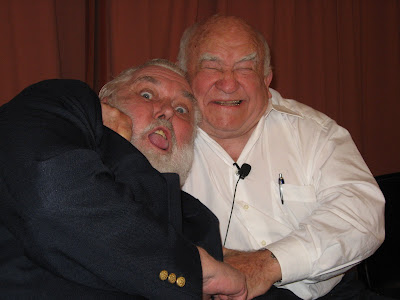 It's Herb Isaacs of the West Coast Jewish Theatre. We were planning to attend their fundraiser tonight, a show featuring several performers. Hal Linden was the headliner.

Jim hasn't sung it in awhile. But, how often do you get asked to go on for Hal Linden? (Is this a new marker of our "fame?" That we can substitute for celebrities Hal Linden or below?)

He asked, "Who's the musical director?"

Gerald Sternbach is one of the best musician / musical directors / musical minds in Los Angeles. He's a brilliant pianist and a terrific arranger and musical director. Getting to work with him is a privilege. Seriously.

Then Herb asked, "What else can you do?"

He needed to fill more time. He needed 20 minutes. So, they decided he'd also do "Sunrise, Sunset."

Jim said, "Well, if you really want to bring down the house, have Steve sing 'My Thanksgiving Prayer.'"

Herb wasn't sure. I don't think he knows me yet as a performer. And I don't blame him. A good producer never puts on someone without knowing what he's getting.

He said, "Well, can you do something from Big Voice?'"

(The show about a Baptist and a Catholic. That sent both of us over. Thanksgiving he wasn't sure was Jewish enough, but songs about the Pope would be?)

Finally it was decided that I would sing "My Thanksgiving Prayer." Luckly, I've been rehearsing all week over at Michael's apartment (with Jake Wesley Stewart, who's going to be joining me Tuesday night at Cafe Bellissimo, BTW, on that very song. And I seem to have a lot of people showing up for Italian food and Steve songs, too! Very cool! Who knew I had fans?).

So, we drive up from the Valley to the University of Judaism, where I've sung twice before for AIDS education concerts. It's up off the 405, Mulholland.

What we notice, though, getting up higher in the hills was the smell of smoke. Fires in Chino and Symar have laid a clowd of smoke over our little San Fernando Valley. Jim was coughing just taking in a breath. The acrid taste filled my mouth and nose. I thought about my friends, Ernie and Chris having lost their apartment to fire. I don't like fire.

Inside, though, it was better. The large auditorium had a curtain on the stage. Behind the curtain was a table set up with sandwiches. And who do we walk into? 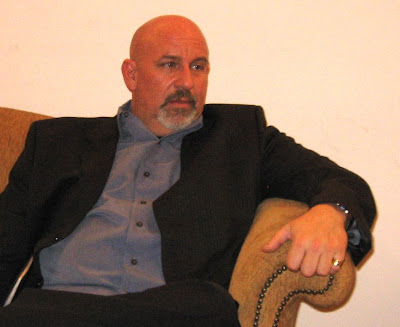 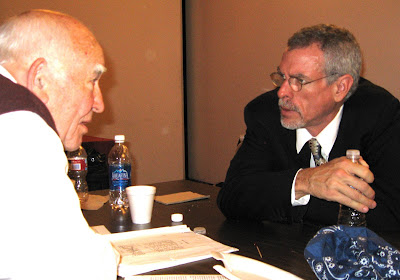 Ed Asner talks to me. 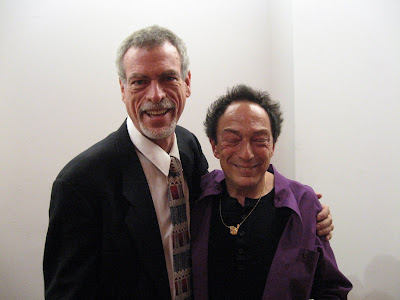 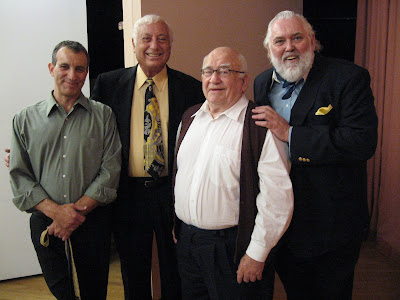 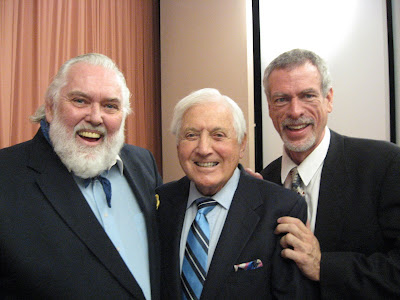 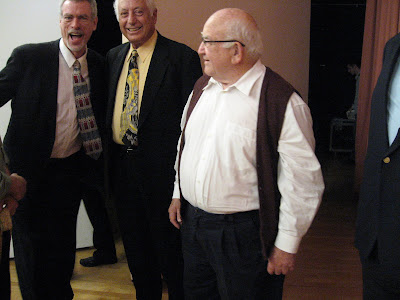 There was also a singer there named Jake Simpson. He's the one who won on "Star Search," and then when he sang on Oprah, they brought out Stevie Wonder behind him and suprised him. And all I can say is, wow, can this guy sing.

So now comes Jim's big moment. We're all kinda sittin' around telling jokes and stories, when Ed says something -- and Jim looks at him and says:

Ed laughed out loud, responded with something hilariously vulgar and I knew this was going to be a great night.

The show started. Monty Hall was the emcee. First he brought out an Israeli singer. Beautiful woman. Lovely voice.

Then, Marty Panzer told his stories about working with Barry Manilow (and then Jake would sing the song). "Even Now" he totally killed. Amazing voice this guy. And he plays piano, too!

That was followed by Ed and this actor friend of his whose name I will chase down, doing a scene from a play about the Jewish composer.

That was my cue. After my great introduction -- Awards! Nominations! -- I told the audience about New World Waking! and how much the theatre appreciates its donors and supporters. And then I sang "My Thanksgiving Prayer."

Jimmy followed as the headliner -- and this is where Gerry Sternbach is so great. "If I Were A Rich Man" is an acting scene as much as it is a song. So the tempo varies, and Jim always invests himself fully in the moment. But no matter how he might cut time, speed up, slow down or pause, Gerry was right there on top as if they had been doing all their lives together.

I did shoot video, so I'll start editing that soon. But what a wonderful unexpected night!

Wow. What a great evening. I love living your bonus round vicariously.

And they couldn't do this when I was there??? I'm sure they would have let me in to watch. I'm a good Jewish Boy.
Instead I have to settle, for a sunshine salad!

Jim Brochu, the perfect NY cop, chanelling Barney Miller in the new millenium. This was a great read. Thanks heaps. Morrie.