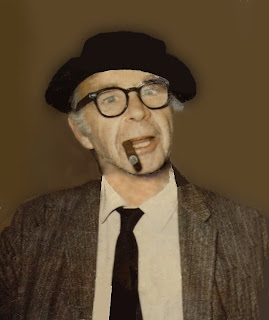 David Burns backstage during The Price at what is now the Richard Rodgers Theatre, then called the 46th Street Theatre.

Inside the Paley Center for Media, a television museum where there is a treasure trove of history. We were invited to see what kind of video they might have of Jimmy's two biggest stage heroes, David Burns and Zero Mostel. Zero is more famous because he did movies and television. But David Burns, while he appeared here and there on TV, made most of his public appearances on the stage. He was, by all accounts, the funniest second banana who ever lived.

Jim tells the story of David Merrick begging Davey to be in a show. Merrick, was, as "Zero" puts it in Zero Hour, "the meanest son of a bitch in the history of the American theatre."

David Burns was fearless, however. After telling Merrick twice to go f*** himself, Merrick finally called Burns into his office. David entered, stripped totally naked except for his socks and a cigar and stood there waiting for Merrick to pay him what David demanded.

The treats this day were numerous.

First, they had a kinescope of Zero doing bits from his stand-up act in 1948! He was a janitor with 10 minutes on his own to clean up the office for Christmas. But what he does is daydream and improvise all over the set. It's just a remarkable piece of tape.

What made us jump, though, was seeing who it was produced by: Phillip Loeb. (If you see Zero Hour, you'll know why this matters. Loeb is a huge part of the play).

But the one that got me was the broadcast of "Hallmark Hall of Fame" production of "The Price," by Arthur Miller. Davey plays this old Jewish man who comes in to appraise, and then buy, a room full of old furniture and personal items. He won an Emmy for this performance.

Now, I've seen some of Burns' stuff, and, while he was definitely a funny guy, most of it seemed to be shtick. Jokes, routines, etc. While I enjoy these things, shtick is still shtick.

I was not prepared for this performance. David was in a scene with George C. Scott, who is no slouch in the acting department, but, by doing nothing but being fully present in the scene, it was as if the center of gravity had moved right to wherever he was standing.

I could see Scott trying every trick in the book to take the scene away, but all Burns had to do was simply open his mouth and say the words, and Scott was left looking like an acting student on his first day in class.

It was a stunning revelation to see David Burns doing what all great actors do when they're at the top of their game, which is nothing. You could see no wheels turning. Nothing except a fully lived flesh and blood character just taking every moment and breaking your heart into a thousand pieces. I was stunned.

The curator told us that so many of the early tapes of live television were just erased over and reused because tape was expensive back then. It's just devastating to think of the history that's been lost because of these kinds of practices. We think of networks as these hulking behemoths with endless pots of money.

But back then, it was you and me and the cat putting on a show.

Jim sat there watching Davy, tears streaming down his face. When Burns had dropped out of The Price due to an illness, they talked him into going back in. So, he called Jim over and Jim had the privilege of sitting there running lines with him as he rehearsed the script. He loved Davy with all his heart. It was Davy who made it possible for him to get backstage, hang out and meet all these great characters. Davy who recommended him for his first job at Surflight Summer Theater. 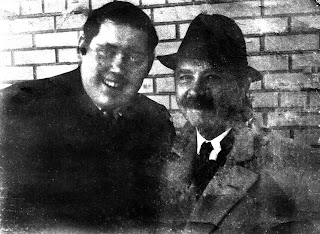 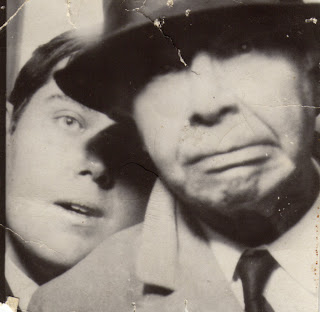 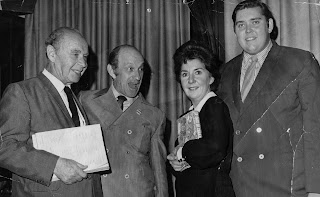 David Burns, Garson Kanin, Maureen Stapleton and Jim Brochu.
By the time we left the museum, we could hardly speak. But he had a show to do!

What a great post!
One small historical correction though: There was no videotape before the early 1960's. Live TV shows from the 40s and 50s were sometimes filmed from a TV screen, using Kinescope. Most kinescopes were either destroyed or disappeared long before anyone thought of preservation, because they took up so much space and nobody thought anyone would ever want to see them again. Most shows that were broadcast live before the early 1960's are gone, unless somebody was smart enough to save a kinescopes or lucky enough to find one. The majority of early shows that did survive over the decades are still around only because they were originated on film for later broadcast(like "I Love Lucy"), rather than being broadcast live.
Lotsa love,
Professor Know-it-all

I saw Davey Jones, after his stint as Horace Vandergelder in "Hello Dolly", as Colonel Purdy in "Lovely Ladies, Kind Gentlemen", the musical version of "Teahouse of the August Moon", during it's 12-performance run in 1970.

The show bombed, and probably rightfully so. But Davey was wonderful. He joined my pantheon of comedic leads.