Zero Hour paintings raise $1,550 for U. of Rochester Theater Dept. 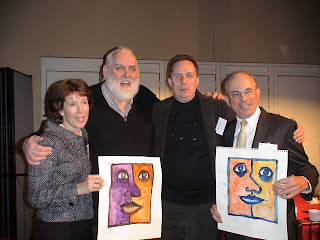 Last night, an alumni group from the University of Rochester sponsored a live auction of the painting Jim created during the evening's performance of "Zero Hour" and raised $1,550 for the theater arts department.

The auction began and the painting was bid up to $800. The winner then donated the painting back where it fetched an additional $750 to the second highest bidder. Jim then took the painting from the previous night's performance and gave it to the first bidder, thus giving both a chance to take home an original Brochu/Mostel painting.

Each night, Jim paints an original painting during the live performance. Each one is carefully numbered and dated, then donated to charity. This sets a record for the most money collected during one of these auctions.
at January 27, 2010