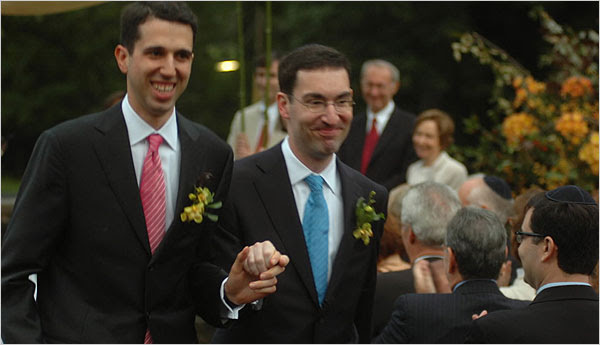 I was just breezing through the NY Times this morning and saw a picture of a couple of guys in suits listed under the "weddings" caption on the front page. Curious, I clicked on the link and read one of the loveliest love stories I've seen in a long time. I think what set it off was how sweetly undramatic it was. These two guys were suitemates in college who dated girls (as boys are supposedly supposed to do), but became best friends and were so close, their friends began calling them an "old married couple." Still, they hadn't really acknowledged their true feelings for each other.

Then, life happened, they separated for awhile, but maintained contact. Then they found themselves back in NYC together again in 1996. The story continues...

One day in August 1996, Mr. Berger asked Mr. Frank to meet him for lunch. Mr. Frank had taken one bite of a burrito when Mr. Berger blurted out the news that he was gay. Mr. Frank said he was completely amazed.

Mr. Berger, now 33 and a vice president and senior investment strategist in an asset management unit of Goldman Sachs, remembered: “I hadn’t told that many people, so I was focusing on his reaction. I didn’t notice that he was nervous. I came away thinking how supportive he’d been.”

Mr. Frank, also 33 and an associate at the New York law firm of Cravath, Swaine & Moore, countered wryly: “He didn’t know how supportive I was.”

Mr. Frank added: “I went from not being willing to acknowledge that I was having these feelings, to ‘This is unbelievable good fortune. This is the person I’m closest to in the world, and we could actually act on this.’ ’’

That same evening it was Mr. Frank who had news, delivered with a line worthy of “Seinfeld.”

“I haven’t been totally straight with you either,” he told Mr. Berger as they ambled through SoHo.

“You?” Mr. Berger exclaimed, stunned. By the next week, the best friends had become a couple.

And now they've married each other in a ceremony, and their story is there for all to see. It's sweet. It's quiet. It's normal and it's beautiful.

Email ThisBlogThis!Share to TwitterShare to FacebookShare to Pinterest
Labels: politics

That is so sweet. Thanks for posting this.

There is much to be said for a simple, no-nonsense beginning to a beautiful relationship. So many folks actually try to lose themselves in the complexity and bravado of the dating scene that they seem to miss the entire reason that they are seeing someone. Kudos to these gentlemen and may they live a long, happy life together :)

Yes, it sure is. Thanks.