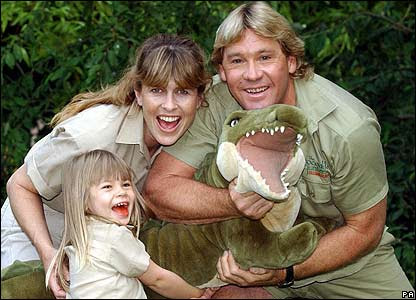 I'm not back yet to blogging, but after waiting a week I decided I wanted to say something about Steve Irwin, who I considered to be one of the few real earth heroes alive. I know something about this because we were privileged to become close to someone very close to the whole Steve Irwin enterprise, someone who knew him intimately.

In this day and age where people do things in order to become celebrities -- with "celebrity" being the ultimate goal -- Steve Irwin allowed himself to become a celebrity in order to do the things he loved and cared about: environmentalism, family, love of animals. I list these three things because, taken together, they form the bedrock foundation of his life. He was an environmentalist because he loved his family. It was because he loved his family -- and they him, beginning with his parents -- that he learned to love all of God's creatures. He loved all of God's creatures and, thus, he became an environmentalist.

When producer John Stainton discovered Steve Irwin at his modest family zoo doing exactly, back then, without fanfare, what he did up until his dying moment, John knew that he had met a truly original human being. Proudly Australian. Proudly human. Proudly in love with life and the animal kingdom. John trained his cameras on Steve and just let Steve be Steve.

They had this perfect arrangement. John wouldn't interfere with Steve's work. Steve would do his best to help John as producer, even though he wasn't a trained communications major taking classes on how to look good in front of a camera. If Steve seemed a little "over the top" when interviewed by Larry King, it wasn't because he was performing for Larry King. It was because, in all place and in all situations, Steve Irwin was exactly the same person.

"Crocodile Hunter" wasn't a "persona." He didn't "hone" his image. He didn't do "tricks" or memorize phrases or try to act cute. What you saw on camera was what you saw off camera. He was the Real Thing.

In our media-obsessed age, where most celebrities are very aware of their "image," which they protect and project. Where media personalities create personas, and where the whole industry allows each side to play the little game of "how to get and stay famous," Steve Irwin simply kept on playing with his animals, raising his family, creating his zoo, advocating for the environment and teaching through doing.

In an age of cynicism and skepticism about everything and everyone, John Stainton knew that all he had to do was stay out of the way and let Steve be Steve. He produced for Steve because he loved Steve and because he loved Steve's work. In his words, it was a perfect relationship. Steve would give John the media time John needed to promote Steve's work, and John would let Steve take the lead on everything else. This family of trust built up around Steve because they followed his vision and his passion. It was pure. It was real. It was everything most celebrities are not.

When I saw the tears running down John's face at the press conference, I couldn't move for days. I know John to be very shy of the spotlight. He preferred to be behind the camera to make sure he didn't miss a single thing Steve might say or do during those precious shoots.

What struck me was how utterly unprepared the mass news media was for the outpouring and the love by sheer numbers around the world. I don't think they realized how big he had actually gotten. And I think fewer still really understood his impact with kids and with, well, my parents who didn't miss a single episode of "Crocodile Hunter."

Replacing Steve Irwin is an impossibility. You can't replace the original. All you can do is try to remember the love that radiated from him -- and to honor him by paying tribute to his environmental work; and to remember that it is still possible, in this day and age, to be completely and wholly yourself.

Indeed, God rest his soul. He was definitely authentic in every sense. Almost ironic that his show wasn't really lumped into the "reality show" category. It was far more real and heartfelt than most of them.