"Whatcha Been Doin' In SF?"

I haven't posted a lot of personal blogs from here because I keep thinking I'll make videos. But then I've gotten so much footage and have gotten so backed up on putting them together, it all starts to get too overwhelming. And then days go by. And it's just too much to remember.

So, first of all, Zero Hour is doing really well. In the first week, before anyone knew it was here, there was little or no pre-sale on the box office. So, this run -- which was scheduled at the last minute as a fill-in show because Ed Decker loved it so much -- is starting to take off. The reviews, as you have seen, have been extraordinary. And it's so nice when the audience begins to show up and really enjoy the show.

One of the nicer visitors we had was a young 15 year old named Anthony, who is undergoing a great deal of health issues. His father wrote and said that Anthony was a true Zero Mostel fan and could we meet afterwards. The answer, of course, was yes yes yes. Such a smart, articulate young man. It was sad to know he was having to deal with life-threatening problems so young.

Jim met him afterwards and gave him the painting he painted during the show: 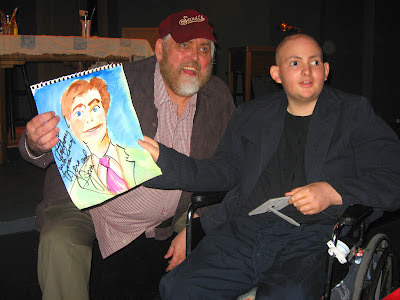 Meanwhile, I've been in a little rehearsal room working on music while Jimmy is on stage. Ed came in the other night and I was passed clean out in the chair in there. So, I guess I haven't been QUITE as productive as I'd have liked. But still, we were invited to a dinner party Sunday night and I sang some songs from our New York revue and got great kudos all around. So, I'm very excited about finishing the project so we can move on to the next one.

Last night, Monday, I went to a rehearsal of the SF Gay Men's Chorus under Dr. Kathleen McGuire. They sounded fantastic, of course, rehearsing for their Christmas concert. It was fun to see Kathleen in action. She's so good. She announced to the group that I was writing a piece for them. (That was the big news I hinted about last week). She's very receptive to the Peace Cantata I've been writing, but the two of us have yet to just sit down and go through it.

So, who knows? She may hate the whole thing. But I love these songs which I've been working on for several years and I would just DIE if the chorus sang even ONE of them. Point being, we're looking at it and if she thinks it fits in with their message, then maybe we'll pull it off together. I do hope so.

I also have had a few evening "song-trading" nights with Daniel. I'd sing a song of mine. And he'd sing a song of his. He really is special, this boy. So cute and so talented. I'm grateful to Ed for making it possible for us to get back together.

Jim has kind of been shaking a cold since we got here. So, really, we haven't been touring around the city or anything. Mostly, I've been trying to keep him warm and quiet. This show is two hours of high energy octane and he doesn't stop for a moment. The great thing, though, is seeing his performance grow and grow and grow. Once he was able to stop thinking about the changes in the book, he began focusing entirely on his characterization -- and it's light years farther along now than when he opened. Which was light years beyond what he did in Los Angeles.

This past week, we also made friends with the director of the Ira & Lenore Gershwin Trust. Mike is a very down to earth guy. He and his wife came to see Zero and were totally blown away. So, they invited down there. And, once again, VIDEO. But how do you choose shots when everything is so amazing? All these paintings and drawing by George and Ira. Incredible.

Meanwhile, across the Big Pond, my friend Ramin Karimloo who's playing the Phantom in Phantom of the Opera has just released a solo CD featuring, among other songs, "At Least I Know What's Killing Me" from The Last Session. You can get it at Dress Circle.
at November 20, 2007

Email ThisBlogThis!Share to TwitterShare to FacebookShare to Pinterest
Labels: SF