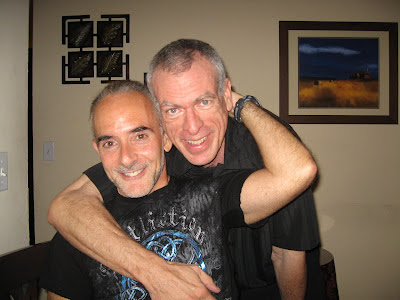 One of the most interesting persons I've met through the Internet is a guy named Father Tony (who blogs as "Farmboyz"), who is good friends with blogger Joe.My.God. He lives up north, but spends winters down here in Ft. Lauderdale. So, when I told Joe we were coming here, he encouraged us to invite Tony in case he might still be here. And, indeed, he is still here overseeing some construction on his place.

Tony wrote a wonderful review of The Big Voice while we were in the Big Apple, so I thought he might enjoy "Zero Hour." Well, that's kind of an understatement. The show has literally been selling out. Last night and this afternoon were completely full to the last seat. Tony blogged his articulate review here. Below are a few of Tony's observations. He began with a conversation the two of us had about how our respective partners do all the driving since both Tony and I have a terrible sense of direction.

...the house lights were extinguished, and from the very first second of “Zero Hour”, it became clear that Jim would drive, and that there would be cliffs, hairpin turns, dangerous intersections, and even a sideways hurdling M-15 Crosstown bus. Not to worry, he got us through the evening intact and thrilled with the ride. Be forewarned: this is not your grandmother’s one-man show. This is a startling, electrifying and explosive two-hour tour of a man who has a lot to say and doesn’t have time to make nice or to wait for us to ask the right questions...

I’ve sat through some one-man shows that are wistful rehashes that cobble together the actual bits from someone’s life without ever managing to justify the presumption that we ought to be interested because, well, we already know he’s famous. In this case, (and with this in mind, I later quizzed Jim over dinner about several lines, wanting to know if Zero had actually said them. Oh, and may I say that all those jokes about this being the land of the 4PM dinner are true. Even the nearby Coconut Creek Seminole Casino’s famous buffet closes before the show is over.) Jim has written entirely original dialogue (with an invisible interviewer seated among us) based on the frightening facts of the boldfaced Zero Mostel.

Have you ever encountered someone in a public place, someone who has a story to tell, and might be a little crazy, and it is so enthralling that you don’t want to break away, that you can’t break away, and you don’t care that you are going to be late for your destination because your plans are nothing compared to what this man is saying, and because you are smart enough to want to learn something from such a one?

That is “Zero Hour”.

Father Tony / Farmboyz is a wonderful writer, so I encourage you to check out the full entry.
at July 13, 2008