I had my headphones on and was working on a piece of music up in the loft overlooking the living room. A big truck came roaring past us outside, the kind that shakes the walls.

That's when it's most scary. Because you are on a bucking volcano and you have no control. It will intensify exactly as much as it wants to.

I immediately looked around me and saw that there was nothing that could fall on me. So I grabbed the sides of the table and just held on. In retrospect, I suppose I should have gotten under the table, but in an emergency I tend to freeze in place.

I was listening to everything downstairs. At first, as I said, it seemed more like a big truck rolling past. But then, as it picked up, I heard things start tinkling downstairs, then dishes shaking, and finally, a crash. Like something falling off the wall.

Then, just as I thought it was going to shake totally out of control, it settled down. Shuddered, then slept.

It's impossible to say how long an earthquake temblor lasts. The one today lasted, as far as I was concerned, a half hour. However, I think I heard some no-nothing "scientist" on TV say that today's lasted about 20 seconds, depending on how far away from it you are. The farther away, the longer the "roll."

I heard voices out in the courtyard. A mom was rounding up kids, her own and others. A shirtless guy in genes was looking for his cat. I hadn't met him before. Seemed nice. We looked for "Mimi" and then, when he was satisfied she wasn't lost in the courtyard, I came back to the apartment to see what might have gotten broken and to look for Steinbeck.

Finding him was easy. Under the bed, eyes wide open. But the broken thing. I couldn't find it. 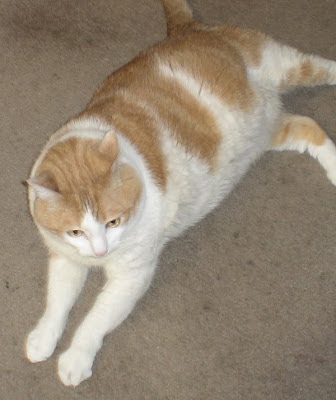 I went back into the kitchen and that's when I saw it. Right at the top of this little pyramid of Presidential plates (don't ask), on top of the French poster of Jim's play, "Cookin' With Gus," "Les Pieds Dans Les Plats," was an empty plate holder.

I looked down at the floor. No glass. No shards.

I moved the rack with the microwave and there on the floor was the plate. I picked it up.

It was Jim's Sardi's plate. The plate I got for him with his Sardi's caricature. 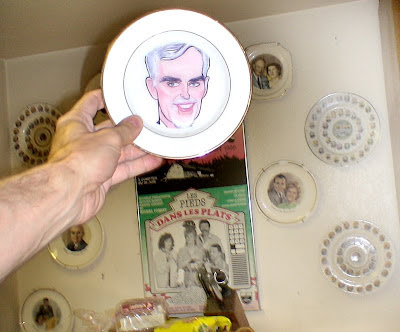 Not a chip. No break at all. What I heard just sounded like a crash.

The Sardi's plate had survived. All is well.

Talked to Jim via Skype and told him everything was fine, but that we missed him. It's fun to see each other on webcam. Makes it easier to be apart, but not by much.

Every time it thunders, both our cats scram to the bomb shelter. Their bomb shelter is under the sofa. They stay hours after the last crack. Seems like a good place to me. I tried. Not even my fat head fits. I can't imagine what would happen if the ground shook here in Pennsylvania!

Perhaps it's a good thing for them that I cannot fit under. It would be a lot less comforting for the cats under there, having to deal with my bladder further complicating their trauma

LOL. Glenn, I know the feeling. If the cat had to fight me for the "under the bed" spot, there'd be a big wrestling match. That is for sure.

I was actually still asleep when it happened. I live with my mom and she was in a panic but I slept through most it (unfortunately).

I hate that I was stupid enough to wait til this happened before actually setting out to prepare for whenever the next one hits. I ordered an emergency multi-purpose radio from NPR and I'll be searching for a first aid kit and put everything into some bright orange backpack.

A good blog. Thanks for sharing and I hope you don't mind if I link you from mine. Looking forward to reading more from you. Ciao!