A Review of My Olympia Concert.

Going into this concert, I wasn't really sure how to approach it. Since the last time I sang full-length concerts, I've written two pieces.

Back then, my concerts were, basically, AIDS education concerts. All of the songs were about living with AIDS and that was my primary identity as a writer and artist. So, in a way, I've grown and become a new person in that time. How to integrate The Big Voice and New World Waking -- and how much of each -- became my task. And there are more songs besides!

I actually tried to design a concert. I wrote up a set list and even went so far as to try writing a script for myself. That turned out HORRIBLY.

Finally, Jim said, "Just do what you always do. Put a list of songs in front of you and just sing whatever you feel like singing in whatever order feels right. You'll know what to say."

And that's exactly what I did. It was SO MUCH FUN to be out there, totally improvising between songs, and just enjoying feeling unleashed from the restrictions of a musical play (not that I don't enjoy doing theater, but I'm not a trained actor, and I don't feel completely at ease when I'm not just being myself, doing whatever comes into my head).

An online review of my Olympia concert, written by Alec Clayton (who is both a local critic and personal friend). It's possible that his opinion is colored by that, but Jeff Kingsbury, who runs the Capital Playhouse, says that Alec is a very honest reviewer. Here is what he wrote with a link to his blog where this is posted.

Steve Schalchlin’s benefit concert for PFLAG-Olympia was the most exhilarating night of musical entertainment I can remember — perhaps ever. And as a theater critic who sees plays 52 weeks a year at minimum, a good half of those musicals, that’s saying a lot.

The performance took place at Olympia’s Capital Playhouse. A grand piano, drum set and three stools fronted by music stands were set in front of the set for the currently running musical, “A Little Night Music” - scrims with birch trees and a gigantic golden moon. 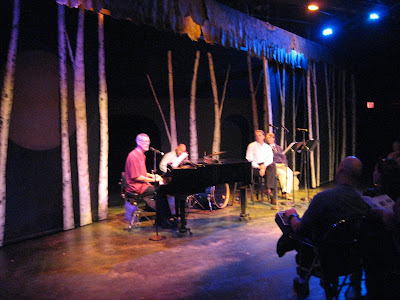 Schalchlin stepped out into the spotlight, a striking figure, tall and rail thin with drawn cheeks and close-cropped gray hair, his classically handsome face now showing signs of his long battle with AIDS. He sat down at the piano and launched into a rousing, gospel-inspired anthem, “I Want to Make Music.” The audience burst into applause, and Schalchlin said, “That was the first song I ever wrote,” thus setting the mood for the night.

For the next two hours he told very personal stories in song and spoken word, effortlessly and without affectation, going back and forth between singing and talking to the audience, the music a balance between ballads and upbeat rock and jazz. He talked and sang about growing up as the son of a Missionary Baptist preacher in Arkansas and Texas, “The Preacher and the Nurse;” about the tender care of loved ones when he was hospitalized, “Connected” and “Going It Alone;” the horror and sadness of attending an AIDS support group. “The Group;” and his hilarious song about the side effects of the medications that keep him from dying, “Friendly Fire,” done as a parody of military march songs (“from the halls of pharmaceuticals to the shores of remedy” sung to the tune of “The Halls of Montezuma”).

All of those songs are from his award-winning musical “The Last Session.”

From there he went into more personal stories of a slightly different sort taken from the second musical co-written with his partner, Jim Brochu, “The Big Voice: God or Merman” (both plays with lyrics and music by Schalchlin and book by Brochu). These songs dealt mostly with growing up gay and religious.

The second act featured songs from his peace cantata, “New World Waking,” which premiered this past December at Davies Hall in San Francisco performed by the San Francisco Gay Men’s Choir. This suite of songs expressed hope for world peace, told personal stories of people who have been persecuted because of their sexual orientation or gender identity and included asking “Where is God?” in a song about a god who seems to have taken “a small vacation” while allowing a deadly virus to get in a baby’s blood.

Schalchlin’s songs are powerful, personal, uplifting, and often perhaps unexpectedly humorous. His church music background shows in the big chords and driving rhythms of his piano playing. He sings with passion and energy, and connects with the audience as if personally talking to each and every person. 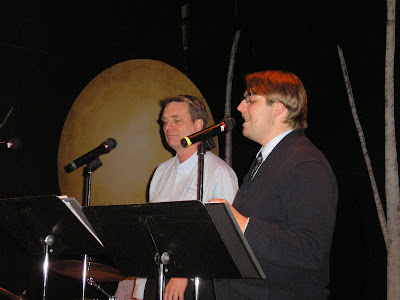 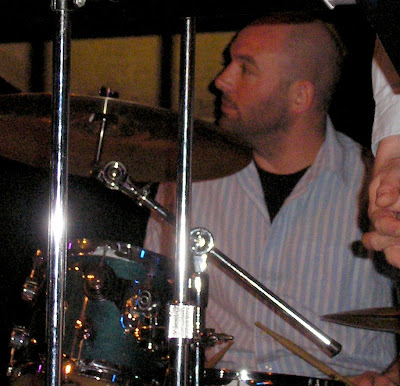 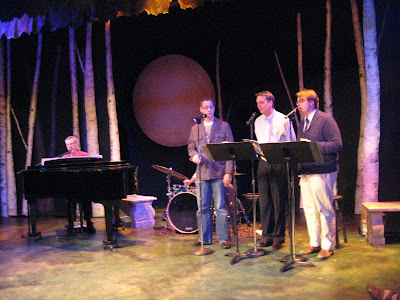 Backing him on drums was Chuck Oldright and a chorus made up of Jeff Kingsbury, Josh Anderson and a special guest from the Portland Gay Men’s Chorus, David Peterson. They had practically no time to rehearse or learn the songs so they were winging it throughout. Oldright, who had never played any of these songs, was able to anticipate complex rhythm changes. His drumming added immeasurably to the success of the performance. The three backup singers not only kept up with complicated lyrics and rhythms, but improvised around Schalchlin’s barbs and quips. When during the song, “The Closet,” Schalchlin sang a line about crossing his legs in a manly manner, Kingsbury and Anderson crossed their legs in unison at an exact timely moment that was improvised on the spot. And Kingsbury, the founder and artistic director of Capital Playhouse quipped in his best Paul Lyndish manner, “I don’t do backup,” reminding me of the comical scrap between two band members in “The Last Session.” 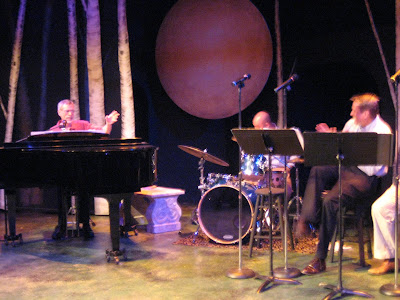 I’d like to finish with two personal notes. First, this was an almost completely impromptu performance organized by a small town PFLAG chapter. With proper promotion from national headquarters it could become a national tour, and I certainly encourage people in various chapters and at the national level to think about that. Secondly, I must include the disclaimer that I am not an impartial critic. My wife and I are longtime friends of Steve Schalchlin, and we helped organize the concert.

And I'm not impartial when it comes to PFLAG. I love what they do. I know they've saved scores of families and lives. I have more to say about Olympia, plus a little video. Not much, but something.

I'm so proud of you!

Everyone had a great time! I had two moms come up to me and tell me it was the best mothers day they ever had - and I am not surprised.

I posted something brief about the concert on the PFLAG website with a link back here and to the program we did (in pdf format).

Thank you Mr. Shack-lin. It is an honor to call you our friend.