Last night (present day), I drove over the hill into Hollywood and attended an industry showcase for a young performer named Sara Haze. (She's only 16 or 17, by the way. She and I have written a couple of songs together, and she totally kicked ass last night). She's being managed by my friend and former songwriting protege, Dave Robyn Woekener. What was interesting was that it was exactly 10 years ago today that I attended the first concert Dave performed as a songwriter singing songs I had been working with him on in my capacity as a creative director at Espy Music (then called Bob-A-Lew).

(I enjoy helping other songwriters. But I do this by digging into their souls, forcing them to confront the stuff most people avoid. If writers don't do this, then they are boring and their writing is vanilla and their potential unrealized. At least, that's my philosophy. I scare a lot of songwriters.)

Looking back at the diary entry of April 19, 1996, I start to get a notion of why people think I'm just bit out of my mind. It starts out:

You're not going to believe this but yesterday I had yet ANOTHER kidney stone. Only this time it was on the right side.

And so what did I do? Well, I was completely not going to go through the hell of the ER again like the last time. I was, as I said, "working" at Bob-A-Lew Music. I wasn't actually an employee, but I got up everyday, took a shower and went down to their offices (Kim & Ronda Espy) as a type of physical therapy. This was my second attempt at bringing myself back to life by doing a dayjob in an office. (The first attempt was a year earlier when I did reception and filing at a music agent's office with my friend Jim Durkin -- that ended abruptly when I became too sick and was hospitalized).

I look back and realize I was relentless. While others around me were dying, I simply refused to give in. I might be wearing diapers, but I was determined to will myself back into health. One way of doing that was to "work" in an office. That's why, once I was back out of the hospital, I called Kim & Ronda and asked if I could just come down there and do something, anything. Sweep the floors. Whatever they needed. Luckily, they did have some actual work that needed to be done.

They had stacks and stacks of papers filled with numbers -- and these numbers had to entered into a computer. It was busywork. The kind most people hated. But I liked just having a monotonous stack of work that required little more than simply typing numbers because, as weak as I was physically, all it required was for me to sit and type.

But also, as I mentioned before, they made use of this skill I developed while at National Academy of Songwriters. In the music business, it's called "Creative" -- yes, that's the technical term. Dave Robyn Woeckener was my first victim. I had discovered him at a big songwriter song evaluation event and invited him to pay a call at the office. In our first meeting, I basically had Dave -- who's a really butch, straight boy rock and roller -- crying like a baby.

I don't mean to make people cry, but I was excavating his soul and forcing him to confront a lot of pain he had been suppressing and keeping out of his music. The result of that meeting was a song called "This Ain't Good" which eventually got him substantial radio airplay and is one hell of a song.

Anyway, 10 years ago, I had another kidney stone. Refusing to go to the ER, I happened to have some Tylenol 4 with Codeine, so I took a few, then laid on the bed, doubled up and drank water until the stone passed. Okay. That's not so unusual. That's pretty much the only way to get rid of a stone. But here's where I look back in amazement at myself and wonder, "What the hell was I thinking?"

I was determined to see David Robyn play tonight.

That's right. I was sick as a dog, dying of AIDS and I had just flushed a kidney stone out of my system after lying in bed in pain all day long. And what was on my mind?

Going out to the club to see Dave so he could see how proud I was of him singing this song, which I considered the first song of his career. (He'd been playing and singing and writing on stage for 10 years before this, but I didn't care). 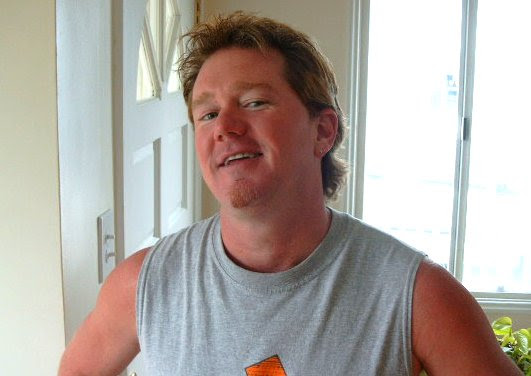 Dave Robyn Woekener
So, last night at Sara's show, I saw Dave, gave him a huge hug and reminded him that it was 10 years ago today that he played his first gig singing that song. Dave eventually also wrote a song about me which he called, "Learn How To Fall." Isn't that a great title? It was one of the greatest honors of my life.

Email ThisBlogThis!Share to TwitterShare to FacebookShare to Pinterest
Labels: AIDS

I think that quality songwriting can only come from confronting what most people like to avoid. I have written many songs about the destructive nature of various lifestyle choices I have made and still lived when I was performing those songs. I often wrote about the brutality of the effects that decisions I have made had on others - and myself. I like to challenge myself (and others) with my music. It has led to me being accused of hipocrosy on many occasions but I always do my best to be clear about my imperfections and clear that just because I am aware of my failings does not mean that I have overcome them, nor does it mean that others should think less of the message because of my failings.

I came to the river of truth and I drank
The water was bitter 'cause my heart was asleep
I ran away crying how can I see
without a change on the horizon. . .

One of the best definitions I ever heard of a good songwriter (or maybe any good writer) is, "Someone who takes a piece of paper and bleeds on it."

In pop music, there are so many writer, so many good writers, that the only thing a single writer has that distinguishes him or her from the pack is their specific point of view; the stories and feelings that no one else can write. And also the deep seated emotions that most people try to avoid dealing with.

Perhaps not EVERY song has to do this, but a writer who ISN'T challenging his audience is just another cup of tepid water.

I had a creative writing teacher in high school who took positive delight in the torment of her students. She believed, correctly I think, that pain makes for great art - teaches one to produce great art. Great music neccesitates ripping ones soul open for the observance and expierience of the listeners - to make them feel what one is feeling. I have always believed this gives one a profoound responsability - music is a very powerful entry into the deeper consciousness of the listener. The writer has a responsability for what they drive into the minds of the listener, the feelings they share.

I will share some of my music with you sometime soon - I think you might appreciate it. I do not however, yet have it online. When I do I will send you some in e-mail.

By and BY, on further consideration;
without a change on the horizon. . .

without a change of horizon. . .

I think joy can also make great art, but generally I find that great writing is about digging deeply into one's self and doing some heavy exploration. Some writers, however, do very well just making a pop hook and using clever rhymes. I think, however, those days are over.