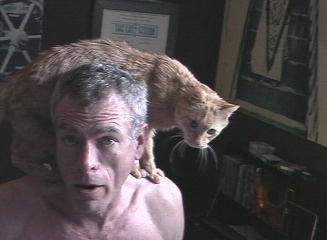 Yesterday, as I was recording different takes of "Save Me A Seat," Thurber decided he needed to be in the shot. I ended up not using anything from this particular take after deciding that the one, single shot of me just singing simply into the camera worked best, but I couldn't let this moment go by, now, could I?

My dogs should start a blog, but they have too much dirty on me. I'd have to censor it!

I wouldn't even WANT to think about what the cats have on us!

Yeah, why do you think my cats are indoor cats with only strictly-monitored outdoor visits? I'm scared of the gossip they'd start...of course, none of it would be true

Well, of COURSE none of it would be true! Cats are well known liars.