You Know It's Election Time When... 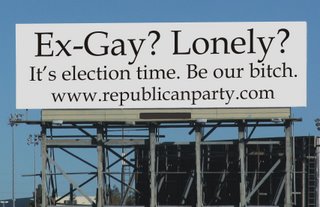 Like a faithful spouse, you can always count on the Republicans, especially the most desperate ones, to start in on the gaybashing when it's election time. Given how badly the GOP is doing now, showing themselves to be among the most corrupt group of Congressmen in history -- and Bush now named by most historians as the worst President in history -- it's inevitable that they would go to the issue that they have always counted on to stir up their religiously based voters: Gay marriage.

In a NY Times story, three particularly corrupt and viciously bigoted politicians, Frist, Santorum and Brownback, have gathered together a formidable group of Catholic Bishops, TV evangelists and conservative church leaders to once again pretend to fight for morality by backing a constitutional amendment to stop gay marriage.

Yes, these paragons of morality, as they support torture, bombing of innocent civilians (instead of fighting the war on terrorism), backing the spying on Americans, lining their pockets with multi-millions from lobbyists while cutting programs for the poor and the sick; those who have ignored the devastation of New Orleans, have targeted what they consider to be America's biggest moral problem: gay people who want to create homes and live in peace. I guess this means Exodus will be getting a big, fat check so they can parade the same ol' "exgay" faces out on billboards under the pretense of ministry.

It makes me so sick to see us being used like that. ARGH. I just want to scream and scream. It makes my blood absolutely boil that the Republicans are using our lives and hearts to win elections. :(

They do it every single election cycle. I remember when they pulled out the first exgay ads. I had friends in the exgay movement at the time and they were so excited because they thought these ads were about their "ministries." Then, when the ads came out, they only appeared in places where the election was too close to call. The ads said semantic blanks like "Change is possible," but the only goal was to convince voters that there really is no such thing as a gay person. So, they could vote against us in good conscience.

Great picture of that billboard, Steve.

It's of course absolutely real.