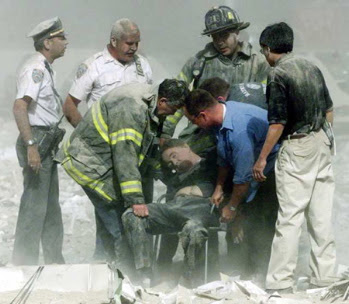 I have to hand it to Andrew Sullivan today for his passionate and beautiful tribute to Father Mykal Judge of the NY Fire Department who died on 9/11 -- and who is the subject of a new documentary film called "Saint of 9/11." From Andrew's blog:

I truly hope that it will get wide distribution and that many will see it. I say this not simply because this saintly man was gay, because he would be barred from the priesthood under the current Pope, or because, in the mysterious way God works, Judge's sexual orientation actually became a way for him to minister more effectively to the marginalized, sick, poor and forgotten.

And this really got to me:

For me, his ministry to people with AIDS in the very early days means the most. We forget how terrifying HIV was in the early and mid 1980s, how patients would be quarantined in dark rooms, abandoned by their families, with their meals rolled into their rooms on trolleys. From the beginning, Mychal did as Jesus did and walked right in and kissed these frightened souls on the lips. If they recoiled from the sight of a priest - gay men at that time saw the church as an alien, hostile entity - he would persist in silence. He would simply bring holy oils, take a chair to the bottom of their hospital beds, and massage their bony, cold, pain-racked feet.

A man of true courage and honor died on 9/11, and he had to live in the closet to fulfill his ministry. Isn't ironic that he had to live a lie in order to be one of the best kinds of ministers in a church supposedly devoted to truth?
at April 28, 2006

I would much rather watch a documentary about Fr. Judge than about Hollywood's take on Flight 93 any given day.

If only people would remember the event of October 23, 1983 just as well.

Fr. Judge baptized my goddaughter, whose mother wasn't married, in the early 1990s, when the child's parish priest refused. He exemplified Christianity in action and I'll never forget him.