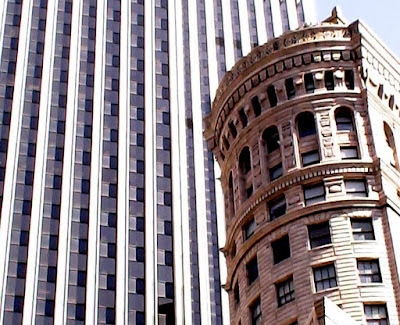 Since we've been here in San Francisco -- basically the month of August -- we have had nothing but the most amazingly perfect weather imaginable. Each morning, there's a bit of a fog. The sky starts out overcast. The breeze coming through the windows is bracing, cool and moist. Then the sun breaks free about mid-morning and the sky completely clears out -- a rich, spotless blue that shimmers magically against the stark concrete of the many skyscrapers.

At noon, the sun is bright. The sky is perfectly clear. The ocean breeze warms up a bit so that when you're standing in the hot sun, the rushing air is cooling your skin -- clean, brisk and fresh smelling. Unlike L.A., there's not a trace of smog. 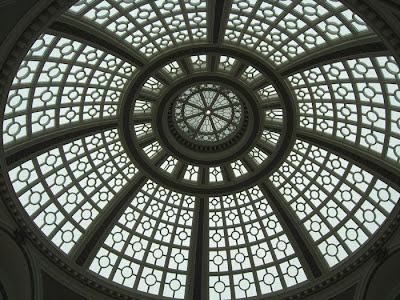 The fog is a funny thing here. It kind of has a ghostly mind of its own. You can be driving in the clear sun, hit a fog bank, and then come out of it three minutes later, perfect skies above. This is particularly likely to happen if you pass over water. The other day, we were driven by a friend over the Golden Gate Bridge to a small town called Tiberon. It was perfectly clear skies until we hit the bridge -- and then we saw this: 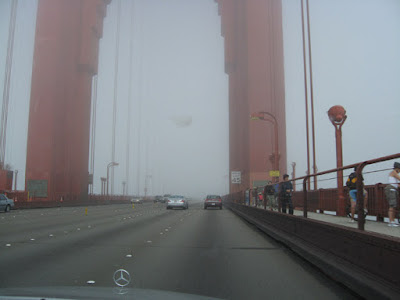 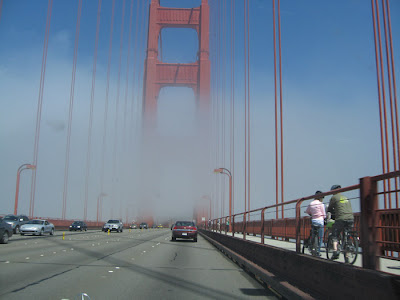 After we passed over, we came back out into the sun, but when we looked behind, we saw this: 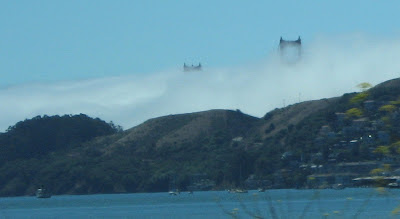 Tiberon is a little town with a beautiful waterfront. This is part of the little tourist area. We went to Sam's Anchor Cafe overlooking the bay. 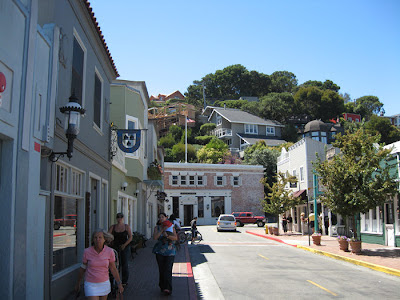 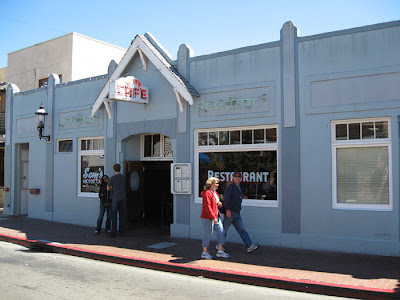 After we left Sam's, we were crossing back over to the car when we saw that the fog was starting to dissipate. So, the city, which we couldn't see before, seemed to appear out of the mist: 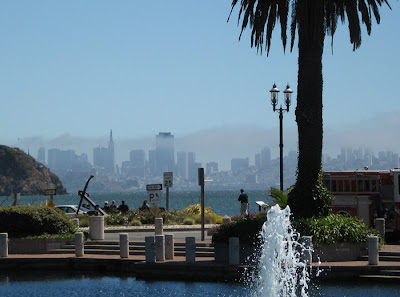 It's impossible to believe we only have two more performances. Last night's show was another roof raiser. The level of pure emotion in that room was palpable. And when we greeted people in the lobby afterwards, they all but fell into our arms. It was truly amazing. One man, "I'm here representing the priests. There were three of us. We loved your show."

A woman: "I'm Jewish and I saw it two weeks ago. I had to come back and bring my 14 year old daughter. Why can't you keep on running?"

"I was raised Methodist."

"I was a Baptist from Oklahoma."

"I knew everything you were going through."

"I directed and choreographed, at the age of 10, a production of 'Annie Get Your Gun' in my driveway. On roller skates."

How can we leave San Francisco? I've never felt so embraced by a community. This past week, I had lunch with Kathy McGuire who leads the San Francisco Gay Men's Chorus. We connected on such a deep level. She's from Melbourne, Australia, and I think we have very similar tastes. I told her how much I loved choral music. When I was in college, I would find myself crying inexplicably whenever I would hear a choir. The sound of all those voices always gets me -- and I can't even say why. Tears just streaming down my face for no reason at all.

We did talk about the choir possibly singing some of my material, but I don't want to say too much at this point or put her on the spot. But let me say this: I do have a rather "big" idea that I have been conceiving -- and since 2008 will be the 30th anniversary next year of this chorus, the first gay men's chorus in the world, it might be a perfect match.

We have also spoken with Ed Decker about writing something for New Conservatory. It's just that we feel so integrated. I want to live here EVERY August!
at August 24, 2007

I love your photos of "my" town. See you tonight!

The idea of your music being sung by the chorus sounds...wow...just wow. I sure hope that comes to be.

Looking forward to seeing the final show today, but also so sad to see it go. SF will miss you two.

Cyndy, we've had the BEST time. And yeah, I hope the chorus does sing a song or two of mine. It would be SO very cool.