In "The Big Voice: God or Merman?" I have a line that comes after, "I grew up in a Baptist home in a Baptist town, going to a Baptist Church. And then they sent me off to a Baptist College. But what I really wanted was to be in a rock and roll band." And except for very brief two weeks as lead singer in the LA punk band where we never sang a song or did a gig, I was mostly in cover bands doing our own demos on the side in studios on the road while singing at night at the Rodeway Inn nearby.

Then, the band broke up and I got gigs singing standards in New York City. Then, found Jim, moved to L.A., worked behind a desk in the music industry, got sick, wrote a musical, created this diary, almost died, and started into the Bonus Round, started singing solo concerts and even though I love all those things, I miss having a band. Or I did. Because I actually do belong to a rock and roll band, though it's more fair to say they adopted me. Their musical skills so overwhelm me, I feel like the least of the least. Maybe they just needed a AIDS guy, know what I mean, Shawn Decker (whose brilliant AIDSness is like a magnet to the rest of the world -- he reminds me that AIDS survivors are super heroes.)?

They are a unique and world class group of artists/musicians/songwriters called Preoccupied Pipers who meet once a year to sing at the International Pop Overthrow concert in San Francisco. The International Pop Overthrow also does shows in LA. which is where I first saw Preoccupied Pipers. I knew Ned's mom from the TLS list. They shoved a video camera in my fist and I became the band videographer for the night.

Then, one year when I was up at Standford University guest "lecturing" for the Jonathan King Lectureship, took me into their recording facilities to record a song I had been writing, "Salvation Song," which could only be done with a band (and has the lyric, "If Jesus had a rock band / Would they play on Friday nights?" basically asking if Jesus was kosher).

Their "recording facility" was in a warehouse filled with books. They could only record after hours. Bob Cox came up for that session. (Bob is in a new L.A. band called The Galaxies).

The song turned up on a CD called "Crispy Taste of Hell." I guess I was in the band! For the next project, "Trout Supershow," I contributed a disco fantasy called "Franco Ate The Paperwork" written on a dare that no one could write a song called "Franco Ate The Paperwork." The CD was in celebration of the fact that the new recording studio has been built -- in a garage, complete with kids and dogs and barbeque and beer.

Preoccupied Pipers have a twist of psychotic pop madness in the core creative team of KC Bowman and Ned Sykes AKA Vinnie's Vipers. This is a seriously hard rockin' band complete with sax section and a couple of dangerously great soloists, none of whom fight for the spotlight. But watch out when they get it. 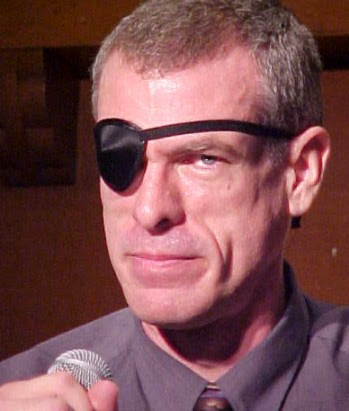 Anyway, that's a long way of saying that, until we got our extension, there was no way I was going to be able to participate in the International Pop Overthrow concert here in San Francisco. It was after our scheduled run. But now that we're staying until August 26, I will be joining the band for the gig at 11pm at the Red Devil Lounge on Polk on Wednesday, August 22 to sing "Cool By Default."

yay! Unfortunately I'll have to miss it, but Walt will be there.