The shows this week have been excellent. Nicely full houses with each evening, with each succeeding night topping the next. This is the part of the run where we see if the word of mouth and the good reviews will actually sell tickets. So far, it seems to be working. I remind the reader that we don't have a commercial "hook" going into this run. That is, no big headline stars. No immediately identifiable commercial subject. This means our show is at the mercy of two things: The marketing department of the theater (which is doing a SENSATIONAL job; in the past week, we've had several live interviews and there are ads for the show everywhere. They seem to know exactly where to spend each precious dollar to achieve maximum visibility. And they also seem to know how and when to twist an arm to get us a feature or an interview.)

And the word of mouth. People go to see shows because their friends tell them to do so. But word of mouth means nothing if that media visibility is not there. So, even though it's only our second week, the houses are full and the reactions are off the chart.

Wednesday night, they were a slightly older crowd. A bit more subdued right at first. But then, at the point in the first act where we meet on board the ship, they were rockin' and rollin' with us. Act two was explosive. Thursday's crowd was with us from the very start. Loud, rollicking and vocal, they were talking back to us and having a ball. So were we.

Friday night was about the same. They didn't talk back to us, but they were present and loud and energetic, staying with us all the way. I just love playing this room. I love San Francisco.

Next door, in the theatre right by ours, the New Conservatory is opening a new production of "Greater Tuna." We've been having a blast joking with the cast and crew. We have adjoining dressing rooms, so we've all been going back and forth, in and out of each others' spaces.

The two actors, Markham Miller and Richard Ryan, are absolutely hilarious and my only regret is that we have the same playing schedule so we won't get to see them. Their opening night is this week. But last night was the first night they played a dress rehearsal. At intermission, they came in wearing full costumes. Naturally, we HAD to pose. 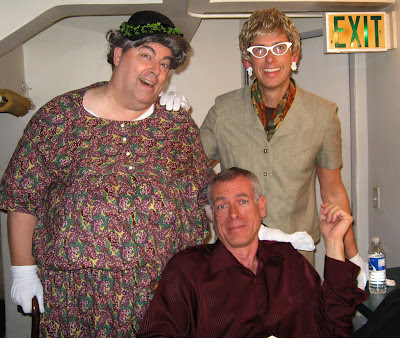 After the show, we were taken out to dinner by two online friends of mine. I've known Chris for quite some time. We met through my brother, Scott. He was moderating a discussion board filled with extremely conservative religious types, many of whom were hideously anti-gay. Chris decided to shake things up by inviting me in.

Well, finally, this was our chance to meet face to face. He and his beautiful wife, Claudine who I totally fell in love with from the first moment we met. Both of them are adorable, sexy people. 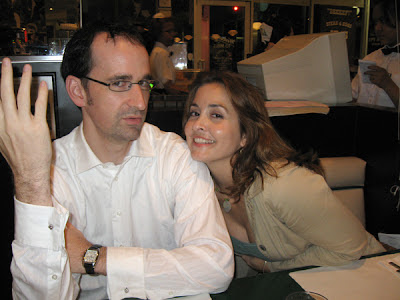 Have I mentioned I love San Francisco? 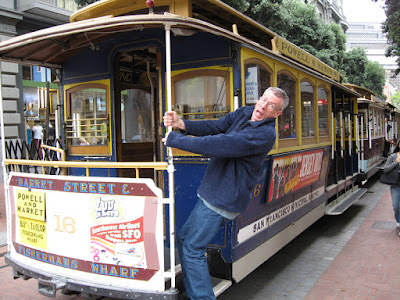