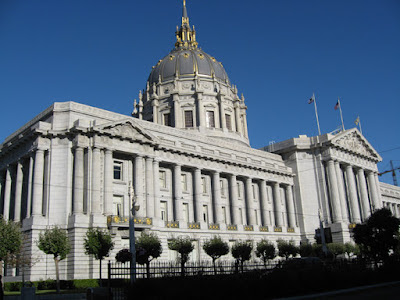 Today's final show didn't feel like an ending. It felt like a beginning. We love San Francisco; and we feel loved by San Francisco. I love just saying, "San Francisco." I love how it's such a delicious mouthful of crunchy sounds.

Jim and I also love the people on the staff at New Conservatory Theatre Center. It's a place where the people genuinely like each other. The sheer volume of work, not to mention the focus required to produce, schedule, staff, cast, build and promote full seasons of shows on three stages is mind-boggling. It's an extraordinary achievement to done by just a handful of people. I've been a part of non-profit orgs. It's a lot of stress and requires utter commitment. It seemed to me that Ed sets a very kind atmosphere. Loose and efficient.

You know, a non-profit theatre is a terrific place to just go volunteer/work when you're young and you need some structure -- especially if you're feeling a bit lost. There's always work that needs to be done, it's a disciplined atmosphere and it's a college education just to work on a full season, even if you're just running errands, making copies and helping build and strike sets (or whatever).

Jim and I loved melting into the family there and being a part of it all.

Several people reported seeing the show four times during this run. Some three. A lot of people came twice. It was fantastic. It made me wonder if we couldn't actually do an extended run here.

I also loved how our journey seemed to strike a chord with so many different kinds of people -- atheists, Catholics, Jews, spiritualists, theatre haters and theatre queens. And yes, Ethel Queens and Judy Queens. The Jewish mom brought her 14 year old daughter (which reminded me of the man who brought back his kids when we played for the Unitarian Universalist conference).

I love that people see our show as a romantic date musical. We saw old gay couples, young gay couples. Lesbian couples (I'm such a lesbophile). Cute straight couples sitting in the front row holding onto each other.

I'm sure this is all sounding very self-serving. I imagine everyone thinks their show has the capacity to cross over to any and all demographics. So, take everything I'm saying with a grain of salt. It's just how I feel right now.

Jim and I were in the car and he asked me how I felt about our experience here. I told him I felt triumphant. Did we totally sell out every house? No. But we always had full houses. And they were always enthusiastic. Plus, we had a total clean sweep of raves from the critics here. And lots of press (thanks to the promotional staff at NCTC).

It just could not have been better -- and it's very upsetting to have to leave just when we felt like we were getting settled in. But that's show business! We form these little families and then we break them up and move on to form even more. Today we drive back home with cats in tow.

So long, San Francisco. We will be back.

So glad it went so very well. Hurrah...

Believe every word that Steve says. I assure you that he is not delusional. Not only is San Francisco the most wonderful place to be, but "The Big Voice" is one of the most wonderful shows to come here in a long time. Yes, they could probably run here forever, turn into celebrated SF figures, and sneak in all their other works in between ("Zero Hour," Steve's music, etc.) As a member of the New Conservatory Board, I just want to endorse this show as one of the most important pieces trodding the stages right now----I've already alerted my Tucson friends about their upcoming run there. Everyone should see this show. It’s one of the best shows about relationships ever, and the best public service announcement for gay marriage. If everyone in middle America could see this play, the issue of gay marriage would become a non-issue in a heartbeat. I feel a void with their departure, and it's a downer to think about going to see "Sweeney Todd," when what I really want is another Jim & Steve fix. Ah, well....as we Buddhists say, all is impermanence, but it's hard to let go! We love you Jim & Steve. Love, Caitlin (& Patrick sends his love too).

Come back! Come back! It's a lot shorter drive to SF than to LA!

Congrats on a great and successful run!

My wife and I were just vacationing in San Francisco last month. We were only there for a week, but a nice two years would be great. I love that city. Great people. Great dining and entertainment.