I Know What Brian Boitano Would Do!

When we were on the ship earlier this year, we met a great singer/actor named Franc D'Ambrosio. He got his big break when he was chosen to play the opera-singing son of Al Pacino in Godfather 3. Then, he was the "Phantom" in San Francisco, playing the role longer than any other actor. He tours constantly as a soloist now. Anyway, we totally fell in love with Franc. (Who wouldn't?)


When we told him we were coming into San Francisco, he said he had a friend he'd like to bring. So, imagine how we felt when we were standing in the receiving line hugging Brian Boitano (who is a total sweetheart). Katelyn, our stage manager, was having major heart palpitations, doing triple lutzes backstage at intermission. I just felt so honored. And, of course, Franc is being deluged with mp3s from me, begging him to sing my songs! 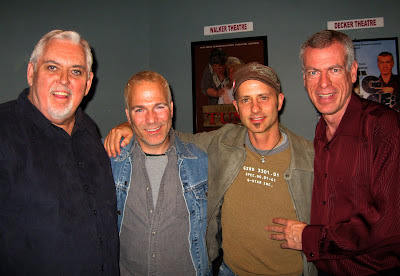 Franc D'Ambrosio fan here. I was fortunate to see Mr. D'Ambrosio starring in the national tour of COPACABANA a few years ago; silly, fluffy, kitschy and actually quite well done fun, the show won me over. Franc D'A. was simply charming.

The whole cast was strong: the radiant, über-talented Darcie Roberts along with Philip Hernandez, Beth McVey, Terry Burrell and one other: Although the "big name" was Gavin MacLeod, I was lucky to see his alternate, Mr. Dale Radunz, who I know has a particular connection to you and Jim, Steve. Nothing against Mr. MacLeod, but I felt glad he was out, Mr. Radunz was such fun. One other standout in the strong ensemble was a gorgeous woman named Vicky Lambert--FABULOUS dancer with the esence of "star quality." Although it looks like she's been working a lot, I really expected to see her rise to fame and acclaim before now.

ANYway, lucky San Franciscans to get to have BIG VOICE available for repeated viewings. Lucky Franc and Brian B. Have fun!

Bennie, I love hearing great things about Dale Radunz. He's a great actor and an incredible comic talent. Anyone who can step into the shoes of Mr. Brochu and give him a run for his money is a towering talent, IMO.

I have yet to see Franc in a show, but I have heard him sing and I have his CD. He is a very gifted man. No doubt about it.