Review: 'The Big Voice' Hits All the Right Notes

"Oh, please let this be true! Please!" I begged quietly as a portly man, wading waist-deep in theatre lore, regaled one account after another of meeting the legendary Ethel Merman as a child. Center-stage after curtain-fall of Gypsy... A dinner booth in Sardi's... The pay-off? It is. Every last bit of this man's life (and the life he's shared with his partner) is true...

Life stories so exquisitely divine, only Mother Fate could have spun! As if each moment in their lives, up to this point in time, was destined to be staged as an award-winning memoir. 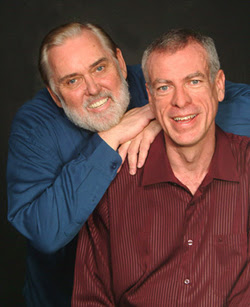 All the more wonderful is that these two amazing men share it all with us. Told as a musical comedy in two lives, The Big Voice: God or Merman?, a special off-Broadway engagement now playing San Francisco's New Conservatory Theatre Center, is truly a gift to the stage hand-wrapped by Steve Schalchlin and Jim Brochu.

Brochu's charming Brooklyn up-bringing, where he discovers Merman between papal-aspirations, matches the endearing tales of Schalchlin's Arkansas home-life, comforted in the closet only by his music. When these two poles of the gay-atlas collide in a chilly and blinding cruise ship piano-bar, the spotlight burns!

Taking a page from the comedian's Bible, Brochu's humor is exact and rewarding. Regarding the show's title question, Brochu encounters Gregorian chants and Annie, Get Your Gun. Guess which wins? Yet amidst the feather and bangles, heavier truths enter the picture: AIDS, dissolving romance, and the rise of Schalchlin's first original musical The Last Session. Most impressive outside of the story-telling is the fantastic craftsmanship Brochu demonstrates in his balanced book. Two polished hours zip from the toys and gimmicks of Act 1 to the earth-moving speed bumps of Act 2.

Much more tame than his counter-part, Schalchlin's showmanship stands simply as a man at his piano. His emotion-laden original songs shine between pivot-points in the script. He sings of an evangelist stealing his faith in "James Robinson;" the perils of sexual identity in "The Closet;" the joys of love and the pain of loss. His heart-elating lyrics spell deeply-rooted stories: "Standing in the light of day and something turns away."

At its core is selflessness and genuine happiness. After engagements first in LA and New York, these two still make each other laugh. To tell their true stories to a room of strangers is one thing. To retell them night after night beside their counter-part is another! 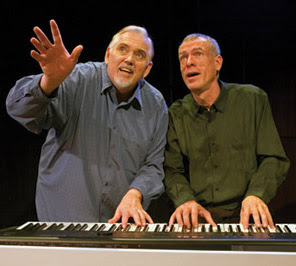 The Big Voice presents two seniors whose stamina and youthfulness rival the camp of musical twinks everywhere! A theatrical tale spun by Mother Fate reminds that it only takes a smile and an unwavering passion to give Father Time a run for his money.

I believe this guy likes the show. Take the honey and hop skip and run, babes. :-)

The odd thing about both of these reviews is that they both said that TLS was "your" show. Apparently it's not clear that Jimmy was somehow involved as well. LOL.

Well, you two "seniors," continue your fabulous run. I hope I'll be able to get tickets for another show. If all the reviews continue to be this good, I may have already waited too long.

By gosh, this is a grand review.

Mage at her blogspot page: