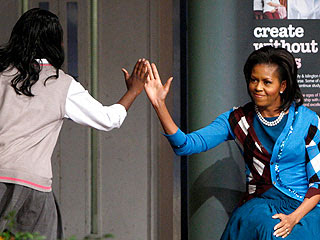 An Obama critic said to me that he felt Obama failed since he didn't get all the spending he wanted at the world trade summit in London, or all the things he asked for.

I think that's very short-sighted. This meeting, for Obama, was not about how much he could force upon the world. There was a much larger and possibly more important thing going on -- and that's the job of achieving respect, both personal and national, on the world stage. He went humbly and he showed himself to be a person who knows how to bring the temperature down a notch. Meaning, to get everyone to just relax and find common ground, based on personal national interests -- with the message that when everyone prospers, it creates opportunities at home and abroad.

The "my way or the highway" politics of Bush and Cheney are now dead. They didn't work. They antagonized the world and created more violence, and strengthened the Islamic radicalism around the world.

Another terrific outcome was the restored dignity of London. Though a few malcontents broke a window or two, most of the protestors, according to reports, could be seen at the Starbuck's taking breaks. No. I think London proved itself more than capable of hosting this kind of event, and doing everything just right.

And then, there's the Queen. First, she fell in love with Michelle. Then, there was that moment with the school girls, the fact that she used local vernacular -- "council estates" -- to drive home her message that anyone can do anything if they believe in themselves and study hard.

The more I think about it, the more I realize that it was the most iconically American Dream Moment we've seen in decades.

This was a girl from the south side of Chicago sitting, as if a Royal, amongst poor, mostly black, girls from the local version of the "projects" in a land known for its class divisions. She became the embodiment of what it means to be American. More, she became the new Princess Diana in that moment. I mention this because that's something you cannot plan. That's something that happens because the right person is in the right place at exactly the right moment.

Whether you are conservative or liberal, you can be proud of this woman representing the soul of this country. She is class act.

And that's what was accomplished. The rest of the world was suddenly jolted back into the memory of what they ever loved about America.
at April 03, 2009

Bravo Steve!!!!!!!...that was an incredible post...I wanted to copy it and put it on my site! I'll send my readers over to get a look though! What a beautiful and insightful glimpse at our first couple, especially Michelle...I also think she's the best thing that's happened to us in a long time, and hopefully she will now be the marker by which we are judged by the word.

I echo Cris, Bravo! You captured exactly what the Obama's are doing in Europe. They are smiling, being humble, human, charming, brilliant, funny and just American. No condescension, preachy, threatening, name calling or winking. Instead they are spreading tons of genuine goodwill. There is nothing better.

Steve, first time I've read your blog and I'm excited to be included in your views and news. I have admired Michelle O. since I first saw her in the campaigns and thought how great it was to see , again, a First Lady who imbodies Eleanor Roosevelt's "I can add something good to this country by my position." She was certainly vilified and made fun of but I read all of her books and can't think of a woman I admire more simply because of her humility and lack of "class" attitude. I'm sure you must know I'm not a younster by now but sometimes age has it's advantages in that we have seen our country through many decades and know a class act when we see it and vice-versa if you want to point out Reagan and Bush administrations!! Enough...Chris' Mom

Should have checked my spelling, but no excuses, I know better. Anonymous

She is quite a lady and I think much more substance then Jackie O.
Good Post !!