I can't take videos and post them because I stupidly forgot to bring the power cord to my video camera. I can take video, but then I'd use all my battery power to download them and I'd rather have a lot of video. So, I'll post stuff after I get home.

The opening night of Zero Hour was great. The audience was on its feet before the lights even came up. The Chronicle review was the same as in the blog posted earlier, but it had a huge layout on the page with a great picture. After the show, one of the Board members, so excited about it, took the picture Jimmy draws during the performance and auctioned it off for $100.

We took Saturday off and went to see the movie "Grindhouse," which we enjoyed in all its blood-splattering glory.

Sunday, my brother Scott and his wonderful wife, Jill, came to visit and see the show. (Video to come). They took me out before the show to a place called the Ragin' Cajun. 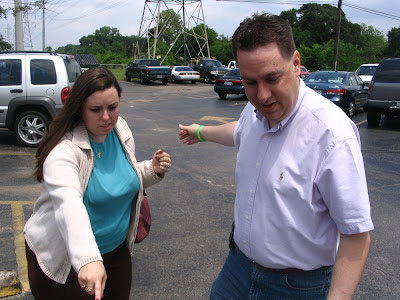 Jill and Scott. I like my brother, but I like Jill better.
She has WAY more sense. 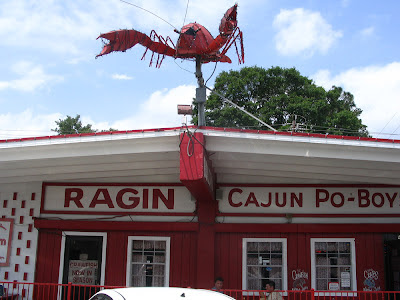 The Ragin' Cajun is topped by a giant crawfish. 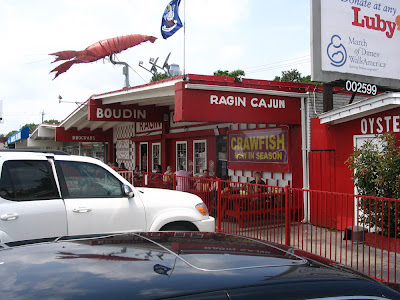 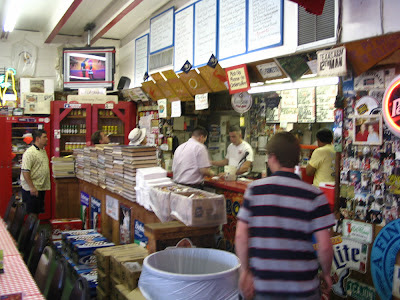 Here is where you line up to order your food.
I'm not sure what the stacks of books are for.
To put the kids on so they can sit up at the table? 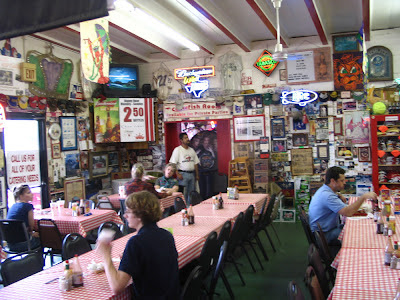 I make jokes, but the fact is that the food here is spectacular. I mean AMAZINGLY spectacular. After New Orleans was destroyed, the people from there who came to Houston loved the Ragin' Cajun best of all, I was told. The fried shrimp was to die for. It's all about the breading. Myself, I had a sumptuous crawfish pie.

On Sunday, the show went very well again. There was a talkback afterwards in which Jim told lots of stories and the people discussed the show and its issues very intelligently, bringing up aspects neither of us had really thought about. I do love Houston audiences and always have.

On Monday, Jim went to the Pacifica Radio station at 90.1. It sits in a small home in a residential area. Politically liberal, the hosts began the interview by saying, "If anyone wants to call in to talk about the blacklist, our lines are open."

So, that told Jim right from the start that this wasn't a typical "show biz" interview. They were focused on the political issues raised in "Zero Hour," which, as the Houston Chronicle mentioned, takes up a major part of the play. I enjoyed sitting in an outer area listening to the interview as they seriously discussed the blacklist and the House Un-American Activities Committee. As I was sitting there, someone came up to me and said, "Hello! I'm Pokey! We know each other form online! I was sitting there listening and heard Jim and said, 'Hey, I know those guys!'" 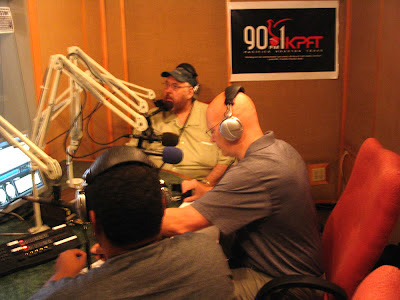 So, I hugged her and we talked for a little bit. It was fun to run into one of my netfriends from out of the blue.
at April 23, 2007

What, praytell, is a boudin?