The great Kitty Carlisle Hart has died. She was 96 and was doing concerts all the way up to her death. A veteran of stage, film and TV, she was a great lady who was a patron of the arts and a great artist herself. Here is a picture of us with her, Marge Champion and Ann Kaufman Schneider (daughter of George S. Kaufman). 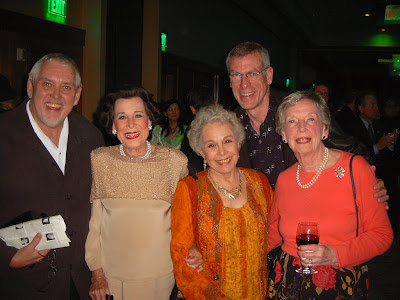 Kitty was one of the classy ladies who was witty, hilarious, talented and beloved. The Wikipedia entry:

Carlisle became a household name through To Tell the Truth, where she was a regular panelist for some 20 years, appearing on each version from 1956 to 2002. Carlisle also appeared as a frequent panelist on the 1968 revival of What's My Line?.

During this period, ever conscious of her image, Carlisle was alert to fashion and became an early patron of Scaasi: "At Wednesday night's Broadway salute to the New York City Mission Society on its 175th anniversary at Avery Fisher Hall, the fan-bodice Scaasis unfurled again. At least one of them did, a turquoise number on Kitty Carlisle Hart, who said she's been Scaasified ever since the designer dressed her for the London opening of My Fair Lady."[2]

Carlisle married playwright Moss Hart on August 10, 1946, after having met as actors at the Bucks County Playhouse in New Hope, Pennsylvania. [1] The couple had two children, and Moss died December 21, 1961.

We were lucky to have met her on several occasions and she always acted as if we were old friends. Gracious and lovely, everyone loved Kitty Carlisle. She will be missed.
at April 18, 2007

She was a beautiful and a very nice lady. She will definitely be missed.

Even when I was a kid I adored Kitty Carlisle...she was "class and style" in a time when "come as you are" was the fashion trend.

Seeing her cameo in the movie "Six Degrees of Separation" was a great treat.