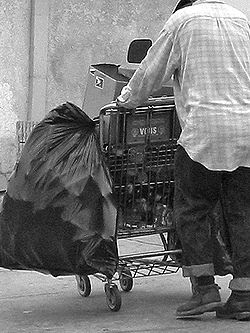 This morning, on my run, I saw Chuck my sometimes homeless Vet friend sitting on a retainer wall near the laundramat smoking a cigarette, his shopping cart tricked out with bags full of cans and bottles sitting nearby.

"Well, I guess I can follow you up the block," he replied, sounding a bit tired.

So, I did. I was near the end of my routine, anyway, so after I retrieved the "California Gold," as he puts it, I sat with him for awhile.

"You probably won't be seein' me around here after two weeks. I'm goin' up to Oregon."

"Oregon, huh? Escaping the heat?" (The San Fernando Valley has been blast furnace hot for the past few weeks.)

"Yeah, an old buddy of mine owns a piece of land out in the wilderness and there's a creek up there. He's gonna give me some money and I'm gonna pan for gold. It's lined with moss, see, and the little flakes of gold get caught in the moss. The dentists and the jewelers, they love that flake gold."

"He's got a still up there, too. Best you ever tasted. Smooth goin' down. Not like that kind that..." and he made sound like a whistling bomb falling, followed by an explosion, pointing at his stomach.

"Gotta watch for bears, though. Black bears. They get mean. I'm gonna have two guns with LOTS of bullets."

"So, you're gonna cure the bear meat?"

"So, you trying to escape the heat?"

"Not really. It gets hot and sticky up there. But I got a book I want to write. It's all in my head, except there's a little extra I might throw in where NASA refurbishes a space shuttle and gives it to me so I can go up there and guide the satellites. You know they got somebody here on earth who does nothing but pull handles to keep the satellites in position."

"Yeah, the book takes place on the planet Cycloptera where all the people have a third eye. And they have dinosaurs with eyes in the back of their heads, but they taste lousy."

I laughed. "The dinosaurs taste lousy?"

"Yeah, and the people wear their hair in bangs over the third eye. I'm gonna sit and write it and then hope some publishing company will want to publish it. I got 354 pages and it's all in my head right now."

"Two weeks. Maybe a month. He's gonna get me a dog and a mule. It's four miles up the river. I'm gonna live in a tent -- you know, like..." and he drew and outline of a tent with a roof and sides.

"Oh, there's lots of birds and fish. But you gotta be careful about making bacon and eggs in the morning cuz those bears'll smell that 2 miles away and come lookin' for ya."

"What about your court thing?" (He was busted for taking a Coke can off a city-owned trash bin).

"Ah, they'll dismiss that. It's not like I shot somebody."

I hope Chuck gets to live how he wants. It's hard to not doubt that it'll happen that way, huh? Seems like he (and many others like him) have had a lot of broken dreams in a lifetime. So I hope that he really does end up with a fulfilling life, however he sees that...and so glad he still dreams and has hope for a future...

Anything he wants to be called.

I hope Chuck gets to live how he wants.

Chuck admits that he's an alcoholic. This is the life that he's chosen. Yesterday I saw a lot of competition out ahead of him poking through his normal bins. He gets up really early to do his rounds, but he always has his flask with him and though I've never seen him drunk -- I think he just likes to keep a little buzz going all day long -- there's nothing, really, that anyone can do. He has chosen this lifestyle and I just recognize him as a guy in the neighborhood. I knew he wanted to see MI3, and since it's at the $2 theatre down the block, I gave him a five and told him to get in out of the heat.

And a lesbian dinosaur?