"This Is Where Thinkin' Began!" 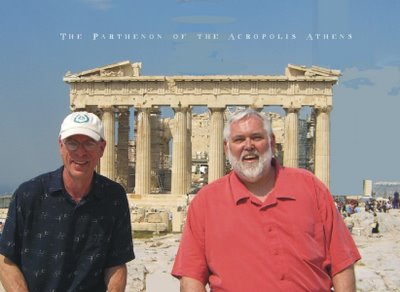 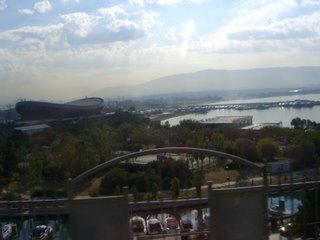 [Pictured left: Piraeus from the bus just after we left the ship.]

The next part of our Mediterranena cruise took us to Athens. I have a love/hate relationship with the Greeks having once worked on a cruise ship run by a Greek shipping line, Chandris. That's another great, big long story but suffice it to say that -- well, I even wrote a song about it called "Down With The Greeks." So, that might give you a slight hint. (It was back during my mid-80s white-boy rasta poet phase which didn't last very long since my hair would not cooperate to become dreadlocks and the rastas hate queers, but that's yet another long story I have yet to tell).

All I knew was that we wanted to see the Parthenon. (The title of this entry comes from an episode of "The Amazing Race" where the blonde bimbo girl, when asked if she knew what the Parthenon was replied, "Sure I do! This is where thinkin' began!"). 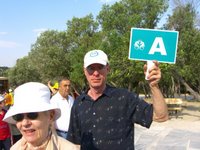 We didn't really have any money for a tour, so I, once again, volunteered to escort the group. This consists of me stayiing in the back of all the little duckies, holding up a sign and making sure they all stay together. The lady pictured in my sign photo was someone we had met before. She usually travels alone and was a history a professor or something. Very smart. She also appears in one of our unfinished mockumentaries, the legendary, "She's Headed To Rome." She does a very elegant death scene at the dinner table. When she saw that I was the escort she asked me specifically if I would take her arm during some of the climbing we would have to do, and I gallantly said yes, of course. I like her very much.

The first big place we came to, after about a half hour of driving, was parking lot that was already filling up. It was going to be a hot day with lots of sun and lots of tourists. The tour buses were lining up and Nick, our guide, explained patiently where the bathrooms would be. Free ones at the top of the hill, pay toilets here in the parking lot. Joining the already gathering throngs, we began the climb up the hill and this was the first thing we came to: 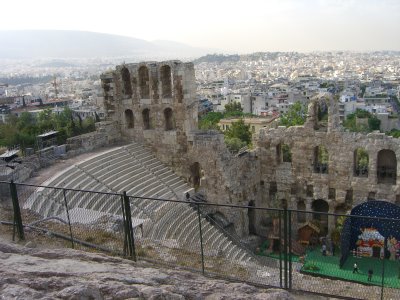 It was an ancient Greek amphitheatre overlooking the entire city. Those Greeks had a flair for drama, no? Well, of course they did! They invented drama. (They certainly kept a level of drama and tension aboard the ship I worked. We even had a mutiny once.) Nick, our tour guide, was very talky. He was very proud of being Greek and though the throngs were beginning to crowd past our little group, he had to explain everything in infinite detail. I missed most of it because I couldn't get close enough to him to hear anything. So, I just looked at the sights. 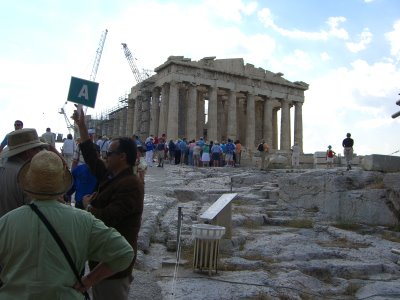 After climbing through the Temple of Athena Nike, we finally got a glimpse of "it." The Parthenon. And I have to tell you that it's pretty breathtaking to finally see it in person. Nick spent a great deal of time here telling us how ingenious the construction of the Parthenon was. According to him, each column is slightly different. Each one shaped so that they all look straight from any angle and that the architect was so ahead of his time, that even computers today cannot figure out his algorithms, the mathematical forumulae he used to create this visual perception. I have no idea if this is true, but it sounds great -- and he went on at length about it. All I know is it looks really good. 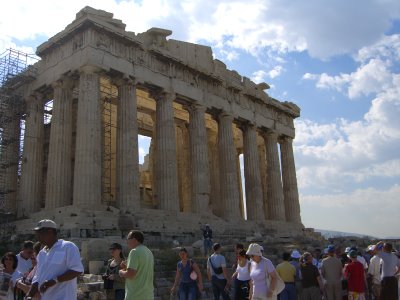 All around the top of the Parthenon are carved pictures which Nick described as illustrating the Greeks' great genius. According to him they represented something about allowing other cultures the freedom to not be called barbarians and how we all ought to talk to each other or something. It was very long and complicated. I liked the basic sentiment, but in looking it up on the Net, I've not seen anyone else describe all that. He was very philosophical, our Nick. Most everyone in our group just wanted to walk, but Nick preferred to stand in the hot sun and expound. 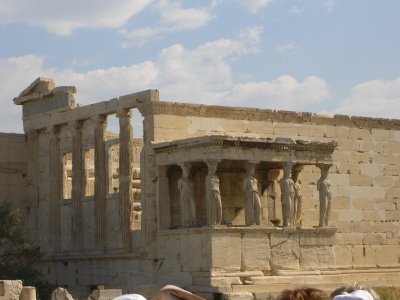 Pictured above is the Erecthion, which was just a few walking steps from the Parthenon. "The building itself contains the porch of the maidens or Caryatids which are now copies, four of which have been placed in the Acropolis museum, hopefully to be reunited with a fifth taken from the Acropolis by Lord Elgin and put in the British Museum more than a century ago." 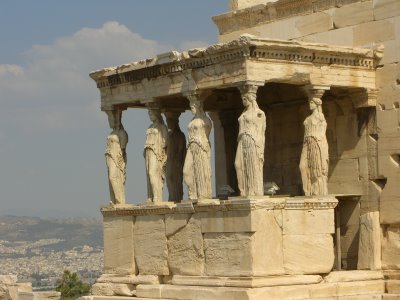 All of these buildings sat on top of a hill, a place called the Acropolis. It was the highest point in the city, and not very large, so when you looked around, you could see the whole city laid out below you. 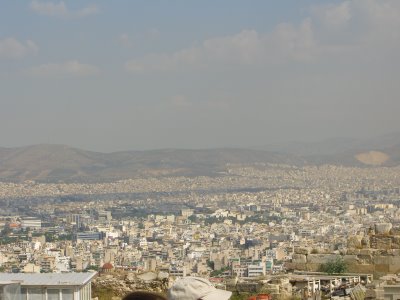 In reading more about all this, most of the best statues and sculptures were all taken away and put into the British Museum or the Louvre. The Greeks would love to have them back, but that doesn't seem to be happening. I don't think the Greeks should hold their breath. Below is our "stand and smile" photo to prove we were there, although I suppose you could photoshop something like this pretty easily. 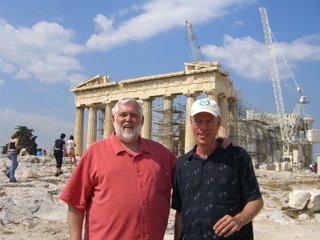 I include the next picture out of sheer meanness. These guys, some fratboys from Georgia, asked me to take their photo while they posed stupidly in front of the monument. So, I took their camera and did so. Then I asked them if they would be in my music video of "HolyDirt." But when I asked them to say, "His fingers are on ebay and his bones are all on AOL," one of them suddenly asked, "Uh, what kind of song is this?"

I said, "It's just a song about how people value object over human beings and..."

I have no idea. Maybe they thought were the shooting Fratboys Gone Wild in Greece or something. So, I thought I'd include them here. Yes, boys, a homosexual took your picture. Now you're going to go home to Georgia and turn gay. 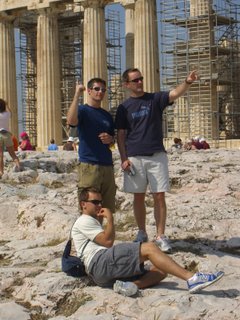 Here's another stunning view of the city. 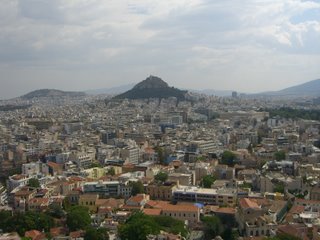 Looking down from the Acropolis was this, the Temple of the Olympian Zeus: 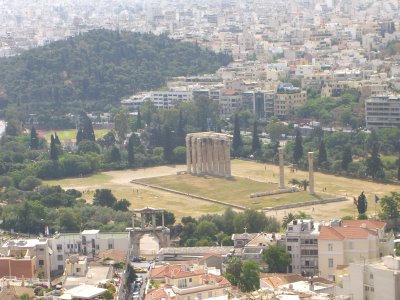 According to athensguide.com "The small temple known as the Thission was built in 449 BC and is virtually intact. Supposedly named for Theseus because his exploits were shown on the frieze, it is now believed that it was actually a temple to Hephaestos and Athena. Unfortunately they realized their mistake too late and the entire neighborhood is called Thission. The temple was used as a Church, dedicated to Saint George, known as Saint George the Lazy because it was only open one day of the year." 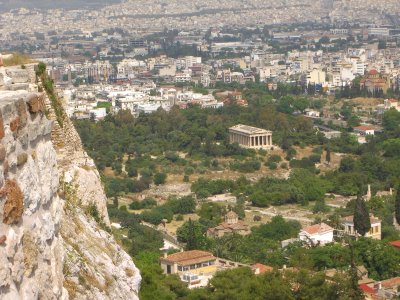 Most of these last few pictures were taken from a little outcropping of rock, a great place to take photos. It was starting to get late, though, so we climbed back up to the Parthenon around to the othere side so we could begin our descent. I saw this gorgeous sculpture: 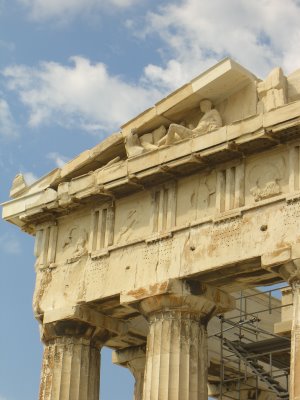 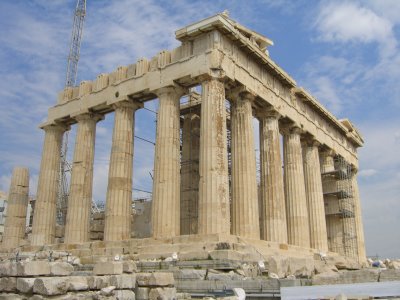 One can only imagine how much has been lost to time and bombs. 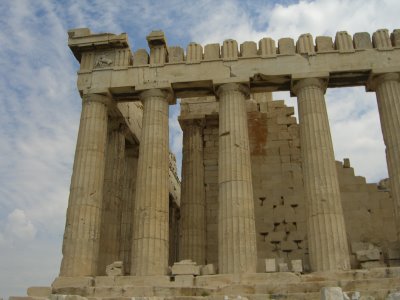 Now we're nearing the front again, but just on the opposite side from where we started. 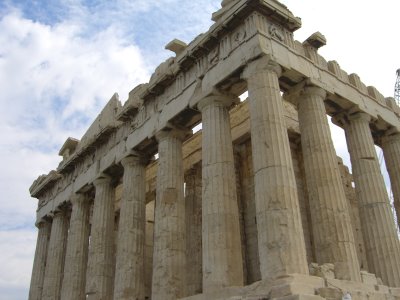 We took more photos from the bus on the way back to the ship, but by then we were tired and hot and just wanted to eat lunch. I still pinch myself everytime I look at these pictures, amazed that we've had the privilege to see such wonders. But I was expecting the Acropolis to be beautiful. The biggest and most wondrous surprise was still to come...

Oh, judging by the picture I don't think you were needed to turn those guys gay... I think a 12 pack would do the job.

The biggest and most wondrous surprise was still to come...

Ya just gonna leave us all hanging, Steve? :)

Love the pics and the stories...(from someone who doesn't yet have a passport but dreams of travel)

Of course I'm going to leave you hanging. I'm nothing if not dramatic!

Loved the pics too--we are off to Europe next summer and have been thinking about going to Greece--now I see that it is a must! Now if I can just get my non-historian husband to travel around to all the archaeological sites.. :)
Oh, and Happy Pride Day (it is Gay Pride Day here in S.F. today).