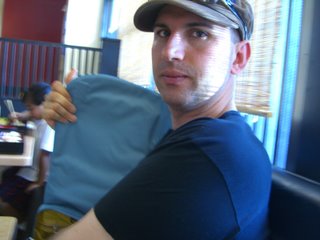 Yesterday, I was privileged to finally meet and talk to Peterson Toscano, a "theatrical performance activist" who is in town to perform his one man play, Doin' Time in the No Mo Homo Halfway House, which Jimmy and I are going to see on Sunday night. Peterson's story is similar to mine in that he was a very devout born again Christian whose same sex attraction didn't make him the most popular person in his church. In fact, he tells the harrowing story of how he was in Zambia with his wife -- yes, he got married after going through the infamous Love In Action ministry in Mephis where he convinced himself, as many of them do, that he had turned straight (which he calls "a biblically induced coma" -- as host of a Christian radio program. And then, he had a little fling with a local Zambian, not the best thing to do in a country where the President is listening to your program and it's illegal to be gay. He literally got out of there with his life in his hand.

During his time at Love In Action, he began doing "characters" and recreating a lot of the experiences he had there. This, in turn, led him to begin writing a book which turned into a play. And how his play has been performed all over the country and even in many parts of the world.

What I like about Peterson is that he is very non-judgmental about the people who populated the exgay ministry. Like many former exgays, he actually was able to deal openly with a lot of personal issues that he would not have been able to talk about with either church members or friends. It provided ground for him to be honest with himself and free to just be himself. Unfortunately, he explains in this blog entry, there is a limit to which one can go. You're expected to get fixed. You're expected to change. And if you don't, well, then the system starts to spit you out. In that entry, he explains it eloquently and says he thinks that Exodus leaders may be among the loneliest people on earth.

With a word, they can be cast out of their positions, lose their most intimate relationships and their church membership only to then become prey to a gay media who often ruthlessly dives on the fallen then picks the "ex-gay" bones clean as they hold the fallen up to the spotlight. 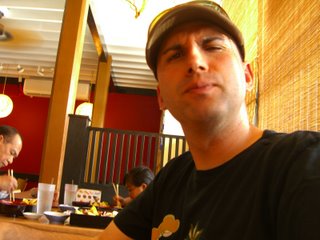 The gay media would probably not really care that much, or be as aggressive against these people if they weren't using their positions to ruthlessly war against us politically. As I explained in the previous post, exgay leaders told me they only wanted to help their own -- other people with "unwanted" same sex attraction. Unfortunately, once they allowed themselves to be co-opted and used by the political religious right as weapons against our civil liberties, then the gay activist groups had no choice but to fight back and expose them when they fell off the celibacy or marriage wagon and began having gay sex or going out to gay bars undercover (as most of them end up doing since human sexuality really cannot be willfully changed, despite what they say).

Peterson, like myself, avoids entanglements in groups, preferring to stay unconnected but available to those who are doing good word telling the truth about our lives. 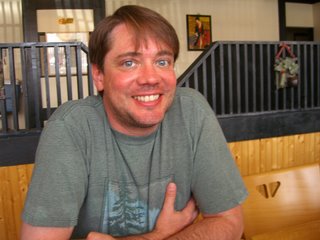 The other person at our table was C. Todd White, an anthropologist who has been doing extensive research into the beginnings of the gay rights movement in the earliest days of the late 40s and 50s, combing through documents of the Mattachine Society and ONE. Interestingly, he said the earliest gay activists were Republicans and conservatives who held that government interference in our lives were against conservative principles. However, they learned a lot of their techniques about activism from the labor and socialist movements.

At one point, he said, there was a huge split -- a legendary split, in fact -- that he felt has been described wrongly and is filled with myth and conjecture. But because he gained access to extensive documentation from both sides, he's been able to fill in the blanks and discover the truth of how it all both came together and fell apart. He's written a book that is going to get a major publication soon. I can't wait to read it.

What I emphasized, in discussing this with both Todd and Peterson is that many, many young people write me because of my position both as composer of gay musicals and proto-blogger on the Net. Most of them are unaware that we have a history. We are a people. We are not like heterosexuals and, like other minority groups, we have had to fight for every single inch of respect and legal equality. It's happening even today as we struggle for marriage rights and the right to not be put in jail simply for being gay. In some countries, we can be executed for simply being gay. Many is the story that has come out about gangs of insurgents in Iraq right this very minute who patrol the streets executing men they think might be gay.

But we have a history. We are a people. We do exist, despite the insane ramblings of groups like NARTH, Exodus, Focus on the Family, and bigoted, disreputable researchers like Paul Cameron. The mere fact that they exist and hate us so much is proof that we exist and that we need to know our history.

I was very proud to tell Todd about "California Hall," one of the earliest incidents, pre-Stonewall, of a time when gay people, doing nothing more than going to a dance in San Francisco in the early 60s, stood up against police who tried to harrass and then arrest attendees, despite the fact that the dance was sponsored by church groups and proper police licenses had been issued. 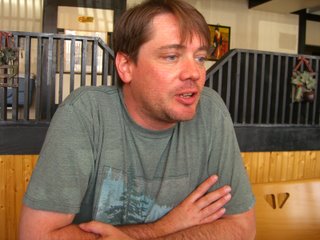 Todd says it frustrates him that many of the deep pocketed people in the GLBT community will fund a dance or an event, but provide no money for research into our own history. I look forward to a time when young GLBT people stand up and demand to know their own history, and who want to know where they come from. Unlike ethnic minorities where one's history is remembered by one's own family, we are born to heterosexual parents. Each GLBT person has to go out and find his own past, find his own community, and discover his own identity. And he or she has to do this, often, in a hail of bullets and hate language from political, religious and familial forces who try everything they can to cover it up, dismiss it or destroy it.

I appreciate people like Peterson Toscano, who lovingly and gently presents the truth of his experience with those who would hate him and persecute him; who refuses to hate them in return. And I, now more than ever, appreciate people like C. Todd White, who is taking the time to sort through our history and document it so that we know who we are by knowing where we come from.

We are not perfect. And we are not better than anyone else. But we have a history and we are a people and we do deserve the same respect every other human being deserves.
at June 03, 2006

Email ThisBlogThis!Share to TwitterShare to FacebookShare to Pinterest
Labels: exgays

i wanted to do a Phd in anthropology way back when and i had some ideas that are not unlike what todd white is persuing.
I am a little jealous that it's him doing this and not me. But just the same i am glad the orgins of the gay movement are being studied in this manner.

Jay, the great thing about this field of study is that there is always more to learn and to study. Look at it as an opportunity. You can take his studies, look at them, and then build upon them. The history of gay people in this country is still largely undocumented. Todd is studying the LA origins. There are lot of other cities where this kind of study can be done.

He's far too cute to be spending all that time doing research!

I trust he's aware of the fact that Harry Hay and Will Geere were Communists. The party looked no more kindly on gays than he church did.