The Wonders of Pompeii 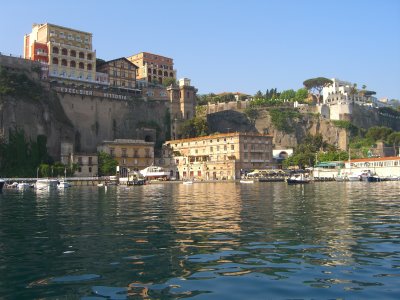 I'm looking forward to telling you all about the places we visited this trip because, like a typical bad traveler, I didn't research them before we went and so when we arrived, I had no idea what it was we were in for. After we left Lisbon and Barcelona, the ship took off for the east coast of Italy, south of Rome, about 3/4 of the way down the "boot" of Italy. We anchored off-shore and tendered in. Sorrento sits high on a cliff, so we had to take some buses up to the town on what the guide described as the "Oh my god" road. They were long, narrow, winding roads that hairpinned up the side of the cliff to the beautiful little city above. As our tour bus drove us through Sorrento and then out to Pompeii, we passed chasms and cliffs. 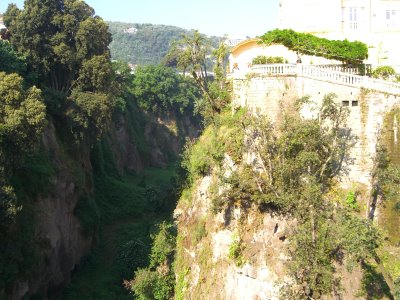 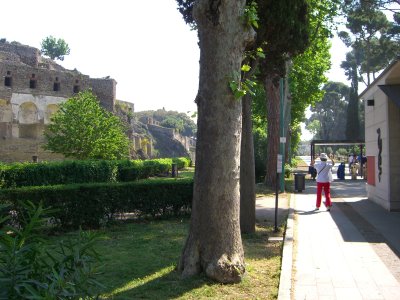 Here's what I didn't expect in Pompeii. In that past, if I've gone to an archealogical dig, the dig itself was always protected behind chicken wire or something so that you could view it from afar, as if you were visiting a murder scene and everything needed to be protected. That's totally understandable, of course. But in Pompeii, you are standing there in the middle of it. It was a city of 10,000 or more. The guides said that the volcano (which you will see soon) probably spewed poison gas first, killing everyone instantly, which is why they found so many bodies just lying there with their meals intact. We began by entering an ancient courtyard. Notice the Roman pillars. I literally gasped. It never occurred to me that we were going right INTO it. 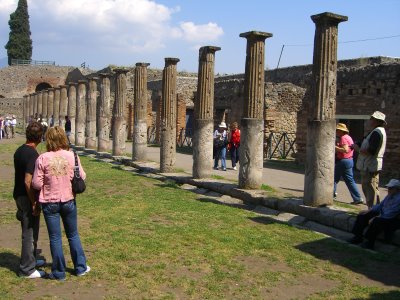 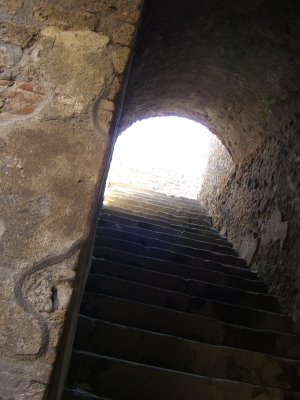 (I used this image for the video of "Secret of the Great Big Hall").
This next photo was where I began to get a feeling for the enormity of the place and how much we'd be able to see it. We turned out of the courtyard and onto this street. On both sides rose the walls of the city. I turned to Jim in amazement. "How big is this thing??" 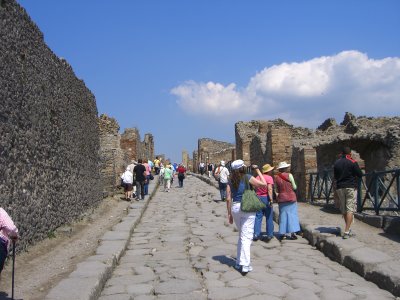 As we walked along, to each side, were spaces--apartments and shops--where people lived. Here, for instance is a counter where they'd cook. A dish would be set into the round brick hole and fire would be placed beneath. 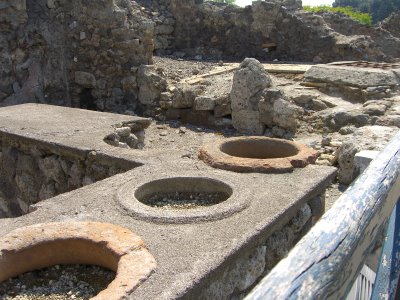 The next image was one of my favorites. These stones were placed at road intersections. They functioned in two ways. They were speed bumps for chariots, so that the chariot had to slow down to straddle the stones. But also, if it was raining, the pedestrians could use them to cross from one sidewalk to the next. 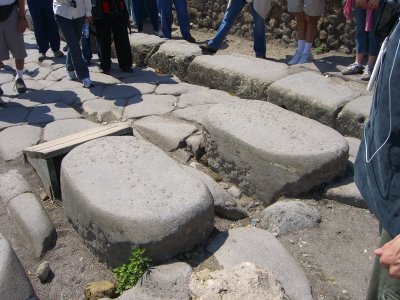 Below, you can see one of the side streets off the thoroughfare. See the sidewalks on each side of the street? 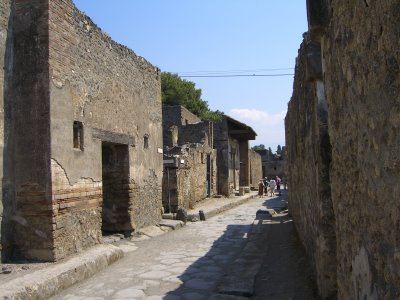 Reminder: Click on the images to see them full scale).
I suddenly had this idea for the song "Holy Dirt." I held the camera in my hand and, with the ipod in my ears, began singing along to make a music video using Pompeii as a "set." Jimmy caught me doing it along this old wall. I felt totally like an idiot in front of everyone, but somehow that didn't stop me. 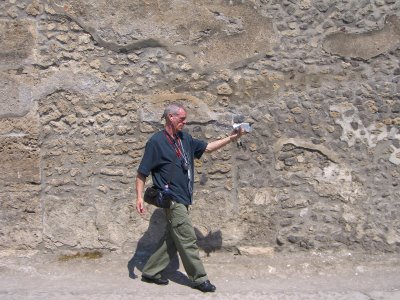 Our next stop was an old temple. It was remarkable how well preserved it was. And how wonderful that it was! I hate that all these people had to died so horribly, but this treasure would be totally gone if not for Vesuvius. 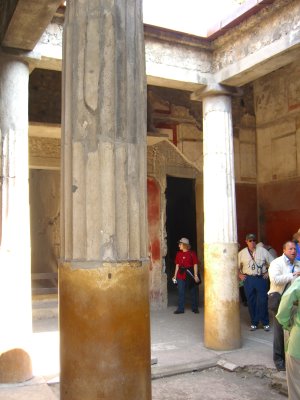 The paintings on the walls: 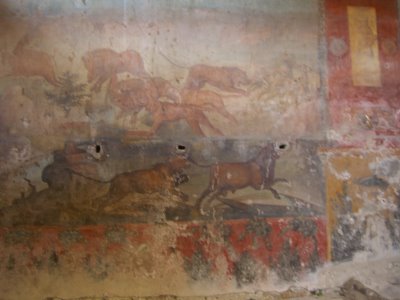 This next photo is on one of the main streets. It's a fast food restaurant. What you thought we invented those? They would cook food held held by pots in the round holes, you'd bring your cup or bowl in, dip into the hot food and take it with you or eat it there. Also, I'm not sure if you can see it on the photo, but at the entrance to the shop there are grooves in the floor for... yep, sliding doors. 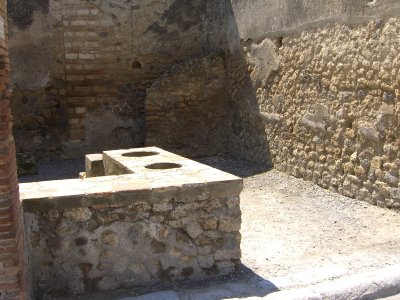 Here's another view of the main street. Our little shop in on the immediate left and you can see the grooves more clearly in the doorway. Notice how wide this street is. It was lined with shops, toga stores, candle stores, eating places and small villa type homes with courtyards set back from the street. This was a high priced neighborhood. 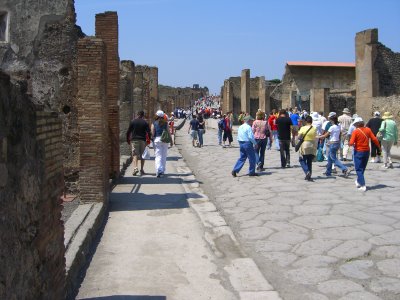 Here is a brick oven for baking bread. No pizza, though, the guide reminded us. Tomatoes came from the USA and pasta came from China. But it does look like a pizza oven, doesn't it? 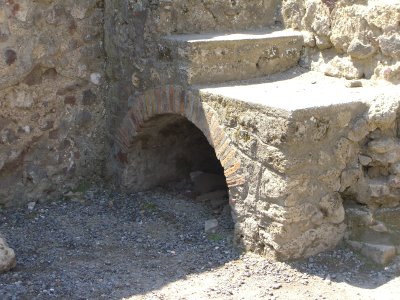 This was a ceiling in another public space just off a public baths. This is one of the places where they found bodies. 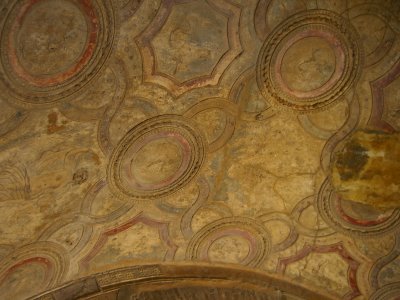 Actually, what they found was that the ash had covered the bodies, compressed around them and then petrified, like a cocoon. So they pumped plaster into the "molds" to reproduce the body, bones intact. 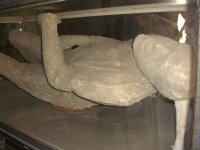 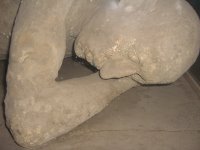 Finally, up on the hill, was the big open air stadium and, looming in the background, Vesuvius. 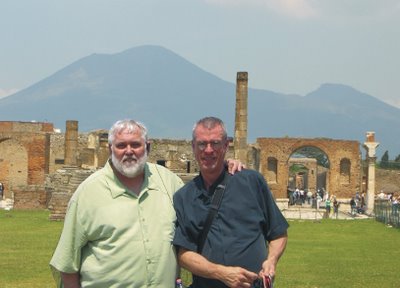 As we drove home, we stopped for one more incredible photo opportunity. This on the hill overlooking Sorrento. If you look very closely, almost dead center in the photo, a bit above the third branch of that tree in the foreground, you'll see our ship anchored off that long dock. It's just a speck, but shows you how majestic this country is. Italy is truly one of the most beautiful countries in the world, so rich with history. 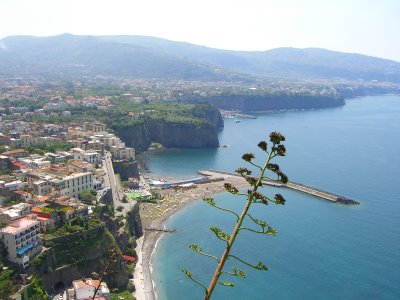 But it was just the beginning of our amazing tour of the ancient wonders of the world.
at June 01, 2006

What an awesome tour! It's like I was there. I love photography AND history. Good job on a great post. I look forward to more tours.

I agree with Randy on the above. ;)

Randy, just wait. We're headed into some amazing places, including... Well, I don't want to say yet. But one place in particular will "vibe" with you.

Ooohhh... a cliffhanger! If I guess will you confirm?

Guess #1 - House of Versace? - I am a hipublican for goodness sakes.

No, not House of Versace. LOL.

It's a place the Apostle Paul got run out of.

Well that reaaaaallly narrows it down ...

Gorgeous photos! I've only been to the northern part of Italy, now I'll have to do the south.

Amazing, Steve! I love your pictures.

Fantastic pictures--I've been to Pompeii three times and can't wait to go again. Did you make it to Herculaneum? We are planning a trip to Europe next summer--so I look forward to more pictures!

I refuse to look. I want my own private showing on the couch with the cats.

Kevin, we were not able to make it to Herculaneum. Not enough time in port!