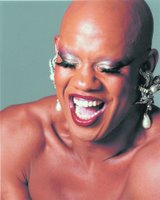 I agree with Joe's position that anti-gay legislation and Republican gay-bashing, along with the so-called "exgays" who empower them gives these kinds of people tacit permission to look for and commit this kind of violence, especially against those who are don't dress in traditional male/female garb. I don't know what these people think they're doing or who they're trying to impress with this kind of monstrous behavior.

Joe continues, "Apparently, passers-by did nothing to stop the attack. Four young men were arrested and charged with hate crimes. Aviance is hospitalized with a broken jaw and other injuries."
at June 11, 2006