At one time, Ephesus was a teeming city of 200,000. It was a major metropolis which was used by the Romans to measure distances from all other cities in Asia. It was already 1000 years old by the time St. Paul arrived there around 52 CE. It remained a vital commercial port until malaria and earthquakes, plus silt deposits that left it landlocked finally did her in about the 14th century. Also, in Ephesus was a huge amphitheatre where Paul caused a near riot and had to rescued from a mob defending the goddess Artemus.

I didn't know all this as we headed into Ephesus. I didn't know anything about Ephesus. And because it was built on rolling hills, when we got to the entrance, it looked "nice," but its breathtaking ancient ruins were hidden from view. So I was amazed to watch it reveal itself as our little tour walked along the paved (yes, paved) road down the hillside to the one of most fantastic ruins in the entire world.

The first thing we saw was this small area of Roman columns and a small amphitheatre. 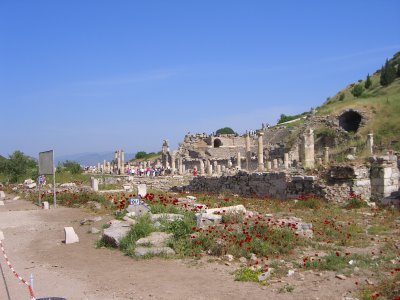 [Do click on the pictures for the full sized versions.] 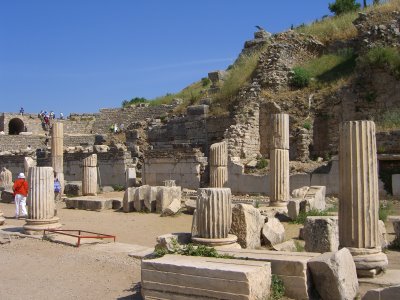 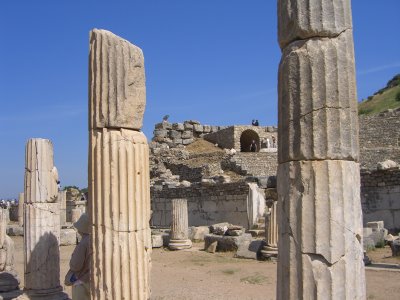 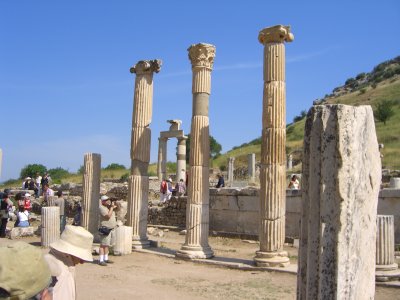 And my reaction was "Okay, these are nice." I like these old columns. But I felt like I had seen this kind of stuff before. But then we made a little turn... 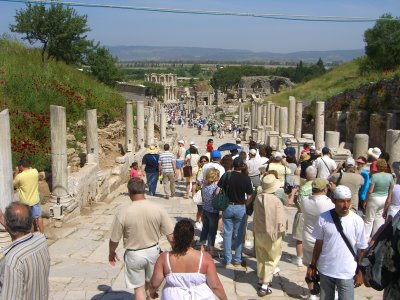 Both of us gasped. In my mind's eye I could just "see" what it might have looked like in all its splendor. This is Curetes Street and it consists entirely of marble. This was the main street of Ephesus that leads down to the great library. Here is the facade of Hadrian's Temple: 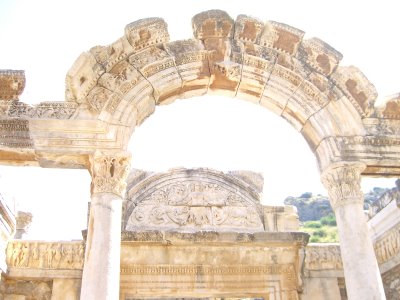 This interested me because it's a statue of the goddess Nike. Look closely and you'll see the famous Nike "swoop" logo embedded in her gown. 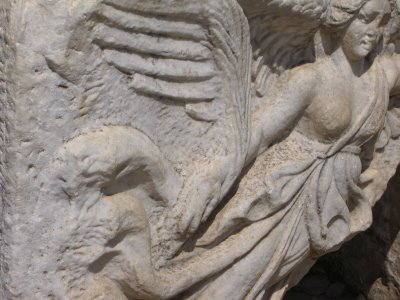 This, below, is part of the newest excavations, which is why those Quonset huts are covering the ground. But on the left were, basically, condos. Each of the stone walls represents very expensive "downtown" living quarters which go up the hill. And notice the elaborately detailed mosaic sidewalk. 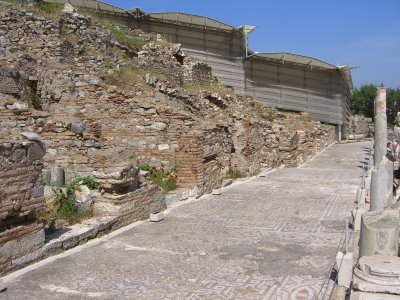 Across the street you descend downward to where there was a water system that was constructed below the city streets. Down here were the public baths. 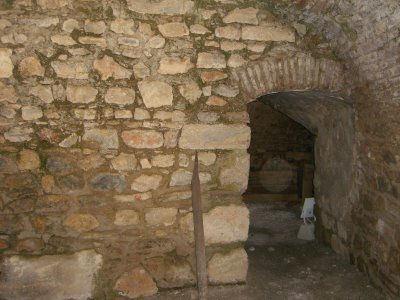 And here's Jimmy trying out the public toilets. 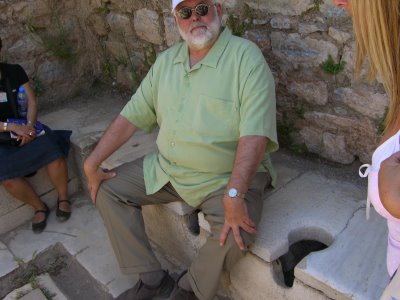 Below, we finally get closer to the Celsus Library, once home to thousands and thousands of ancient scrolls. Our guide told us that Marc Anthony emptied the library and gave the scrolls to his girlfriend, Cleopatra, who put them in the library of Alexandria, which, of course, burnt to the ground -- one of the greatest losses in the history of mankind. 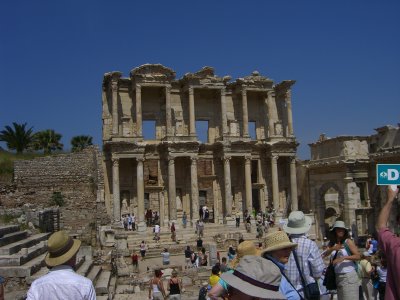 Next to the library is the Gate of Augustus, built by two slaves who had been freed in honor of the Emperor Augustus. 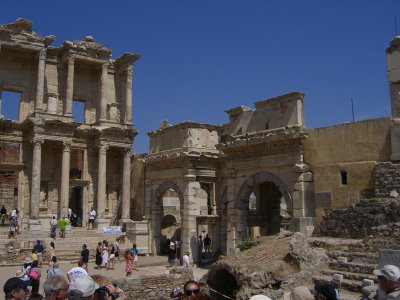 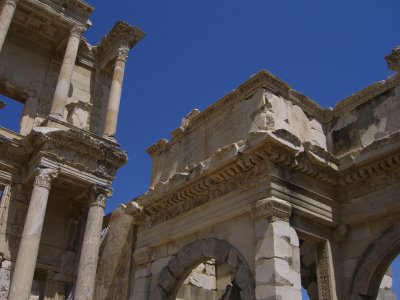 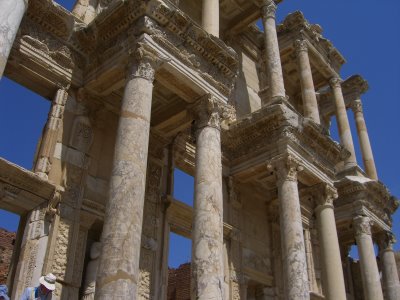 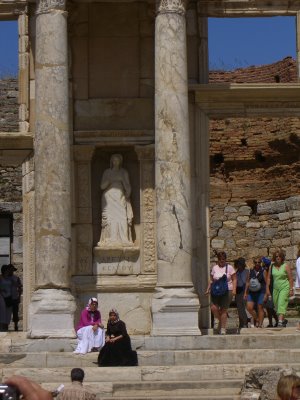 Notice how finely detailed the ceilings are. 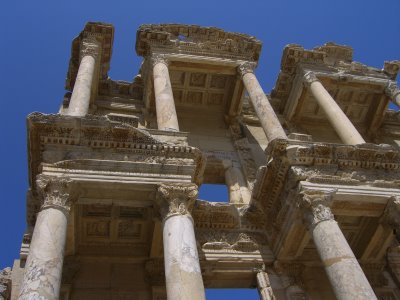 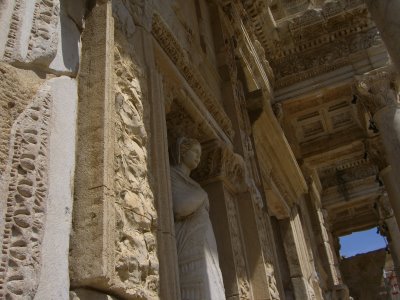 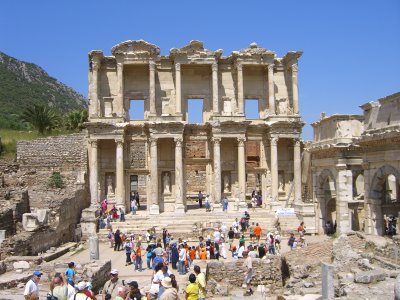 Connecting the Library to the Great Theatre is a road called the Marble Sacred Street. Once again, constructed of pure marble. 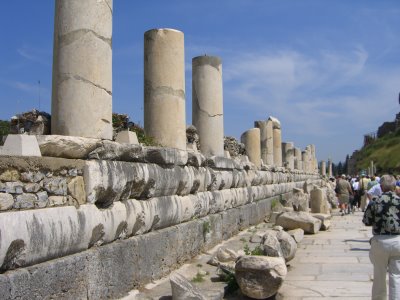 And that leads us to the Great Theatre at Ephesus. Here's the stage area. 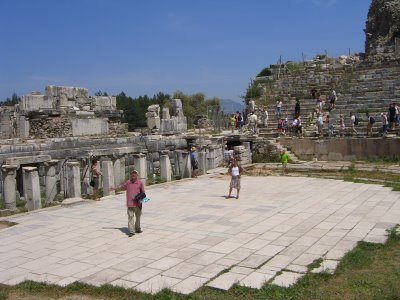 And the seating area: 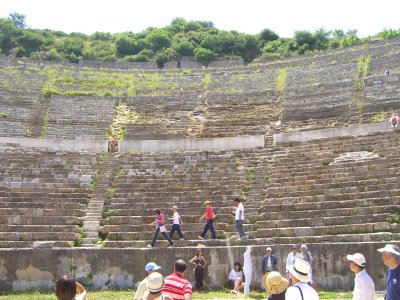 This is what it looks like seen from a distance: 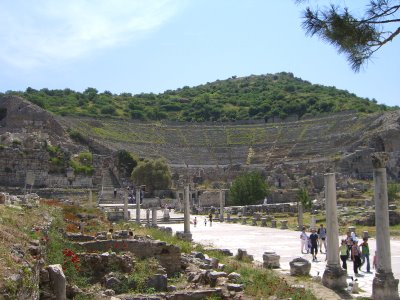 And since Paul was run out of there, causing a near riot, I thought I'd make it up for him by standing center stage and singing just to get a sense of the incredible acoustics. Jim, who can't let me do anything without trying it out for himself, decided he had to do the same. Here is what happened:

I am really loving the tour!
Oh, and in case you didn't know, Emperor Hadrian was gay. He was absolutely and totally in love with Antinous. Antinous drowned in the Nile under suspicious circumstances (you don't really have to guess why he was killed) and Hadrian was so distraught that he set up statues of Antinous all over the empire and was worshipped as a God. It is a sad story...