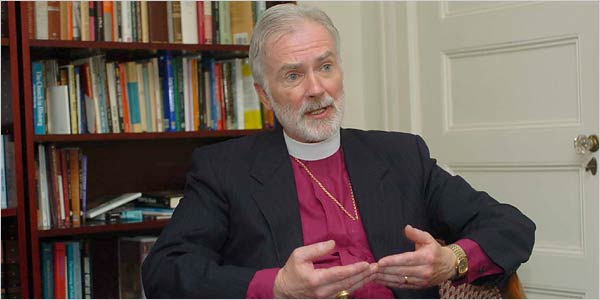 The leader of the Episcopal Diocese of Connecticut, Bishop Andrew D. Smith, has authorized priests to give blessings to same-sex unions during religious ceremonies. The move threatens to further alienate the conservative wing of his church and deepen a fissure between progressive and orthodox Episcopalians nationwide.

“I believe in my heart and soul that it is time for this church, this diocese, formally to acknowledge and support and bless our sisters and brothers who are gay and lesbian, including those who are living in faithful and faith-filled committed partnerships,” Bishop Smith said on Saturday in a speech at a diocesan conference in Hartford.

The decision, reported yesterday by The Hartford Courant, does not authorize Episcopal clergy to officiate at civil unions or create an official prayer service for the blessings. Rather, it permits parishes to acknowledge gay and lesbian couples who have had a civil union granted by the state. Connecticut approved civil unions last year.

The decision allows each parish to choose whether to acknowledge same-sex couples during religious services, said Karin Hamilton, spokeswoman for the diocese.

In other words, the choice is up to each parish to make that decision for themselves.

I bring this up because recently Andrew Sullivan, a Catholic conservative, openly gay blogger who supports gay marriage said that, though he supports legal same-sex marriage, he also had questions about whether it should be allowed as a sacrament within the church. His reasoning was:

"The church's view of marriage is so linked to heterosexuality and procreation that including gay couples within the same sacrament might violate its theological meaning."

Personally, I find this position appalling. First of all because is assumes there is only "one" church, the Catholic Church. (Many Catholics are parochial this way).

I can name a number of churches for whom same-sex blessings are VERY MUCH a sacrament. So, for him to make a blanket statement like this is not only annoying, but totally false. If he wants to continue to devote his worship to a church that rejects him and his partner, that's his business. But to insist that there is only one church who's setting the standard for what's deemed a sacrament is not only insulting to every other denomination, but hubristic.

And secondly, it assumes a heterosexism where heterosexuals are superior spiritual beings to gay and lesbian people. It also assumes that marriages are little more than baby machine factories. Anyone who is spiritually joined with another human being knows there is a lot more to marriage than simply making babies (although the Catholic Church would have you believe otherwise).

As for the Episcopal conservatives who are just falling all over themselves because these so-called "militants" want to include gay and lesbian people in the marriage sacrament, who's really the militant here? The Bishops who are serving their congregations and the people in them, or the outsiders who want to toss these congregations out of the denomination because they feel they have to control the lives of people who don't fall under their spiritual authority?

I love their reasoning: You people are going against what we want so we're going to break apart the Episcopal church and blame it on you.

Sorry, but if you break up your church because you don't like what this Bishop is doing to serve his own people in Connecticut, YOU are the militant.