The Big Voice Coming To New York At Last! 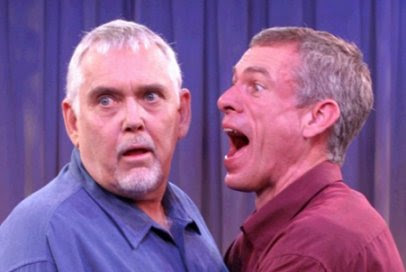 Well, we've been promising it. We've been talking about. And now it's here.

The Big Voice: God or Merman? will be arriving in New York in mid-November for a Nov. 30th opening. Yes, fans, at last, the off-Broadway production will open.

And one of the best parts of this is that it will open in a brand new off-Broadway house called The Actor's Temple. How appropriate is that for a show about God and Ethel Merman?

Actually, the Actor's Temple is a Jewish synagogue which is doing what many other houses of worship have done in New York: Make a theatre! And why not. Religion! Show business! Same thing!

I'll have ticket information up soon.

By the way, isn't it fabulous that the first show to open in a Jewish Temple is a musical about a gay marriage between a Catholic and a Baptist?

I thought so, too.

woo hoo! playing big east coast city! that's about a 9.7 on the impress-o-meter...

Well, that is wonderful! You guys just go and knock thier NYC socks off!

Ooohh, goodie!!! I'm gonna drag (you should pardon the expression) along a bunch of my friends, too.

Saw the show last night in NYC. Was an amazing story and performance. I can't say when the last time I laughed and was emotionally moved in such extremes in the course of 2 hours. Congratulations