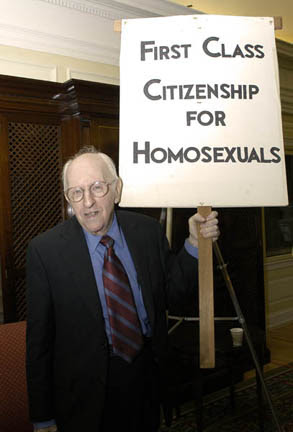 Little did I know, when I gave my talk to the GSA at Norwich Free Academy, would I see history unfold in such clear detail when, this week, at the Smithsonian, the papers and artifacts of legendary civil rights pioneer Frank Kameny would be accepted. This man, at one point, was a lone voice speaking out against discrimination and hate. And he refused to be cowed as he led lonely little demonstrations in front of the White House 50 years ago where the attendees had to be very careful about their dress and demeanor. These brave souls paved the way for the rest of us, as I told the GSA, to be able to keep our jobs and meet freely and openly without police smashing down our doors and arresting us. 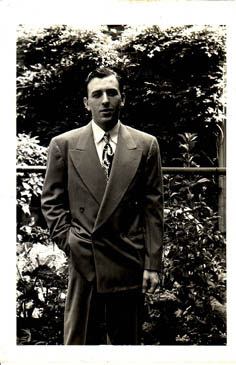 On October 7th, Frank Kameny donated his papers and artifacts, such as the above poster, to the Smithsonian in honor of his stand for "homosexual rights" 50 years ago.

“Nearly fifty years ago, the United States Government banned me from employment in public service because I am a homosexual,” Kameny said. “This archive is not simply my story; it also shows how gay and lesbian Americans have joined the American mainstream story of expanded civil liberties in the 20th century. Today, by accepting these papers, the nation preserves not only our history but marks how far gay and lesbian Americans have traveled on the road to civil equality.”

The collection includes original photographs of gay men and women picketing the White House in 1965 along with the original picket signs; the original policy statement of the U.S. Civil Service Commission (1966) explaining to Kameny the legal arguments why homosexuals “are not suitable for federal employment”; documents tracing the formation and advocacy of The Mattachine Society of Washington; documents from the American Psychiatric Association and the fight to “de-list” homosexuality as a mental illness; and impassioned testimony by Dr. Kameny in defense of scores of homosexuals being stripped of security clearances, and fired from their government jobs.

The Kameny papers now become part of the nation's repository of personal papers in the M anuscript Division of the Library of Congress where they will become available to historians and researchers after they are processed by the Library. The Manuscript Division of the Library of Congress includes the original letters and papers of great Americans from all walks of life---from Frederick Douglass, Walt Whitman and Abraham Lincoln to Susan B. Anthony and Bayard Rustin and a thousand other historic figures.

Many of Kameny's original picket signs carried in front of the White House, the Pentagon and the U.S. Civil Service Commission will be made part of the political history collections of the National Museum of American History. There they will join similar artifacts such as abolition broadsheets, suffragist banners and civil rights protest signs collected from groups around the country.

Yes, reader, we have a history. We are a people. And, yes, we even have our flaws. As current controversies swirl around us, the courage of Frank Kameny reminds us that the closet is evil, and that one man, standing up for what's right, can change the course of human events.

I'm glad to hear this. I've known Frank for 44-years. A few months ago I don't believe he had even drawn up a will.

Jack Nichols, one of Frank's proteges, died at 67 without a will and his papers were nearly lost because of a homophobic step-father.

Frank told me he didn't start weeing a physician regularly until just a couple years ago.

Randolfe, thank you for the information about Jack Nichols. It seems no matter how much work someone has done for our community, there is always some devil waiting around to destroy it.